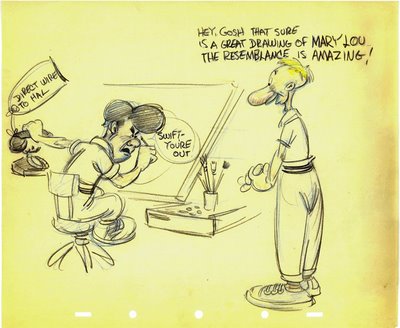 A gag drawing that I think was drawn by the guy on the right, David "Bud" Swift(or as Ward Kimball called him in later years, "David 'don't call me Bud!' Swift"), an assistant at Disney's in Fred Moore's unit from 1940-41.
The "Hal" is Hal Adelquist, a kind of Don Hahn, or studio operations/production manager of the period. "Mary Lou" was something of a running gag between Fred, Bud and Ward; she was apparently a studio secretary. I love drawings like this; they really capture the mood of the moment at a workplace. Plenty of them are still being done at animation studios all over the world, though we might have to wait 60 years until we see them.

Here's a different view of Fred, by Alex Ignatien, probably done in the last year of his life. At age 41 or so, he's changed quite a bit from the boyish figure of scarely ten years earlier, but he's still viewed affectionately. 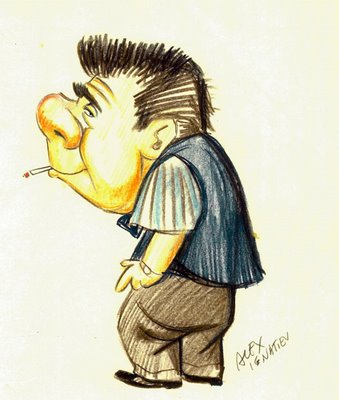 Woooowww!!!!! I love stuff like this! What a treat! A long time ago at Howard Lowrey's I came across a really funny back shot caricature of a girl in a bikini. The drawing was from Disney and the style was similar to the one on the top drawing you posted. Howard's assistant told me the girl might be someone called Mary Lou, a much caricatured person in those days. Gee, I wish I'd bought that drawing. It was hilarious!

Anyway, thanks for posting these. Freddie Moore Week has been spectacular!

Hal is actually my Great Grandfather and he did a lot of cartoons himself, but most have them have been lost. He was one of the original creators of Donald Duck. Cool Stuff. Thanks for sharing. If you ever find more cartoons, please do share.