This Ed Benedict concept drawing, a study for "The Flinstones"(presumably Wilma) was posted today on Cartoon Brew; it was reprinted along with many other choice illustrations and an interview with the great Hanna-Barbera TV designer, Benedict, in the laserdisc booklet that was packaged with the Flinstones set of discs some year ago. I was struck by the close resemblance to one of Fred Moore's girls. One specifically, although it has very specific attributes of many of Moore's girls. There were two other Flinstones ideas for the same woman that were very different, much more stylized in a 50s sense.
A quick browse found the Moore head I was thinking of, from the oft-reproduced model sheet of centaurettes designed by Fred Moore. Here they are side by side. Surely Benedict was a Fred Moore fan. 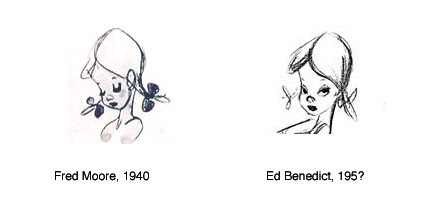 "Which twin has the Toni?"

wow, I spotted that one too!! And I know next to nothing about both Ed Benedict or Fred Moore (well, about the last one most of what I know I learned here).

I love Ed Benedict's character designs. Looking at the other two drawings on Cartoon Brew, maybe he was using the Fred Moore girl as a starting point for the design.

Jenny Lerew said...
This comment has been removed by a blog administrator.
6/15/2006

I love Benedict's designs too; he was a master of what he did. This design is atypical of his usual style(certainly of the way he went for "Flintstones"); you're right--the other two shown with this(see cartoon Brew for the others)are so different I supposed he was just tossing this girl out there, casting around for ideas. It's funny to be how subsumed the Fred Moore style is, in a lot of artists' work--sometimes guys you'd never connect with him.

As a friend pointed out, Moore really did start a style, an entire method of cartoon drawing. The impact of his personal style can't be stressed enough. There wasn't anything that he had to go from that was even close to what he created when he changed the face of american animation, and it was the pushing, searching opportunities of Disney's in the 1930s that mad it possible for him.

Gabriel--yeah, I know...obviously I agree, it really pops out at you! I thought it was striking enough to post the two examples, just as a curiosity. It's not meant as a dig at Benedict in any way. It is what it is--whatever it is! ; )

Artists borrow, take and use each others' stuff all the time, always have, aleways will-it's how it's used that ultimately matters in animation. Certainly Ed Benedict's more personal design style made the final 'Wilma' a far cry from a demure young girl, like this pigtailed nymph.

Have the The Illusion of Life book at home, nice to see more, wonderful stuff indeed

Fabulous stuff here Jenny, won't go into EVERYTHING, but just wanted to let you know I'm following your blog & getting a lot out of it. Thanks.

Just a little piece of trivia: Ed Benedict worked breifly for Walt Disney Studios. He designed all the characters for Make Mine Music's final segment, "The Whale that wanted to Sing at the Met", aka "Willie, The Operetic Whale"

The moment that gives it away as Benedict's work: A group of singing scientists in round horned rim glasses (black rimmed circles with white fields and a single black dot for an eye-like some of the incidental characters from the Flintstones) all sing a chorus that goes something like, "we heartily certify it!" and then they blink in unison.

first off, i really LOVE your blog. i'm a high school senior preparing to apply to art college, so i'm trying to learn as much as i can.

i adore fred moore's work. he's one of my favorite artists. this particular post just caught my attention, because both drawings looks exactly like one of the early sketches of wendy from peter pan that i have in my peter pan sketch-book series book. have you seen it? i need to scan the image and send it to you. but since it was before they had finalized the character design, i imagine it was originally drawn in the 40s...so maybe it was moore?

I note the character also reminds me of Penny from THE RESCUERS. The Moore influence is definitely far-reaching!