More weirdness from my closets: 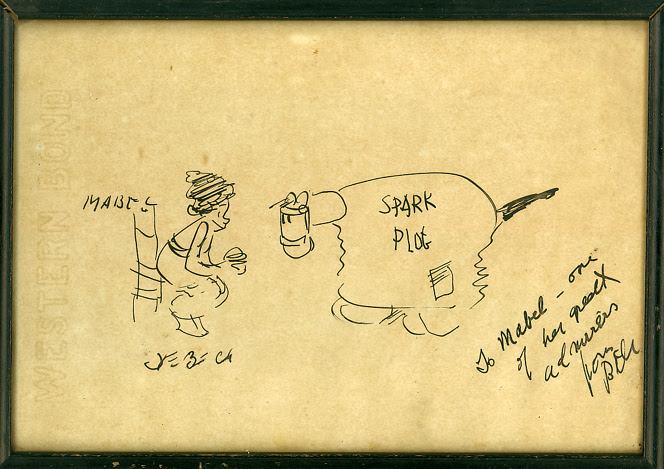 I bought this from a friend of a friend, Len Corneto, in 1990. Len was and is an authority on silent films, in particular his favorite actress from the period, Mabel Normand. For years he collected posters, stills, and all sorts of other stuff while doing research on Mabel for a book. However, he had major life changes and simply wanted to divest himself of everything he had concerning her; since he knew I was a cartoonist/animation person he offered me two small framed drawings Mabel had received as gifts: one from Pat Sullivan("Felix the Cat"'s owner/producer), and this charming little doodle by Billy DeBeck.
De Beck was a hugely popular newspaper cartoonist whose biggest hit was "Barney Google". In that series was the horse named Sparkplug shown here. Who knows under what circumstances DeBeck met Mabel(or if he even met her in person), but she treasured this enough to save it when she'd lost a lot of her things from formerly flush times. It was in a trunk of hers when she died of tuberculosis in 1930.
DeBeck's comic strip was made into animated cartoons several times, first in the 1930s, but this gift drawing from DeBeck to the beautiful comedienne must have been much earlier, perhaps around 1920 or so. That's his signature under the drawing of "Mabel".

Funny you should post something about De Beck and Barney Google. Admittedly, I don’t know too much about him, but I have a framed, newspaper page from the Salt Lake Tribune dated May 31, 1936 of a Barney Google comic strip. It’s almost three quarters the size of the page; just huge! I actually received it as a gift from a good friend who was moving down to LA. Above it is a strip called Bunky that was by De Beck as well. Maybe I should take a photo of it and post it on my blog one day.

COOL! I am envious and covetous. Two sins, and some mangled grammar. This is what old cartoon drawings do to me!

Smook--what a great gift! Please do post it! I honestly haven't seen much of DeBeck, and I should-plus it's always fun to see littler-known strips.

Jeff--Ha! I feel lucky if I can get envy out of you!
The only person who gave a *&!@ at WB(or knew who DeBeck was) when I got this was--guess who? Fontanelli. Figures! ; )

DeBeck was one of the old greats. He was as much a celebrity as say, Stephen King is now. Back then, comic strips sold newspapers and so the best creators were treated the way famous writers and actors are treated today. In fact, DeBeck was kind of a jet-setting playboy. He was imfamous for travelling and partying and missing deadlines. I read one story were he was so late on deadline that a syndicate representative tracked him down (I believe he was in Paris) locked him in his hotel and stole his pants, refusing to give them back until he had finished the next batch of overdue strips!!!
I read these stories as a kid and thought "Man, that's what I want to do!"
Of course, things are different now.