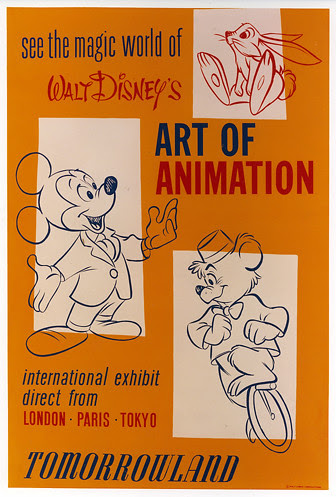 Here's a copy of the Disneyland poster for the brief "Art of Animation" display that was stationed in--of all places--Tomorrowland from 1960-1966. One of the lesser designs for these gigantic sheets, but interesting for its subject.

Adjacent to the exhibit were bins of cels that customers could paw through at will (yes, that's how it was described to me by someone who was there, and bought plenty of them)--everything from "Alice In Wonderland" to "Peter Pan", "Sleeping Beauty", numerous TV programs and shorts, etc....all for just a few dollars each.
I wonder what the thinking was, doing this attraction in Tomorrowland? Perhaps it was just a space issue.

It'd be nice to see something like this return, wouldn't it? In more recent times my friends and I always looked forward to the corner area in Main Street with small displays of upcoming animation projects(defunct last time I was there--crowded out by the ubiquitous t shirt displays that so overran the entire Park). Hopefully it's an idea whose time has come around again, for good.
disneyland, animation, theme park

Good stuff, Jenny!
You are a foutain of information!