Animation on "Pinocchio"; Michael Sporn has the goods 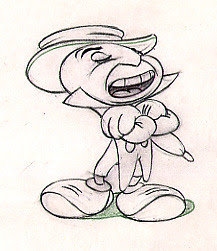 Legendary NYC animator and studio owner Michael Sporn's blog has a great post today: he's begun to scan the pages of the animation drafts from "Pinocchio". The drafts are the entire record of who animated what on each feature and short; Disney had these drawn up for their records, and they're fascinating for buffs and animators to study(in an earlier post I scanned the first page of "Nifty Nineties", a Mickey short that Ward, Fred Moore and several others in their wing worked on). Ward's particular character has always been known to be Jiminy Cricket--but quite a few other unsung artists did beautiful work on him as well. [Ham?]Luske, [Bernie?]Wolf, and "Towsley" all have nice animation in there.
You'll notice Ward did get the closeups.
Go see!

Jenny , thanks for the link to Sporn's posting of the Pinocchio draft. I hope he keeps putting more pages up.

The three other animator's listed there as working on Jiminy scenes are Don Towsley, , yes, Bernie Wolf, and I think probably Don Lusk , though it is confusing on the draft because it is spelled "Luske" and Ham Luske is listed at the top of the page as the sequence director . Ham Luske , who was a great animator, very possibly grabbed a scene and animated it during the course of production, but Don Lusk is on the credits of Pinocchio as an animator , and I believe I've seen other Jiminy scenes attributed to Don Lusk , so I'm inclined to think the draft is misspelling Lusk as "Luske".

Thanks, David! I was hoping a better geek than me could solve the names. : )

Thanks for the mention, Jenny. These sheets fascinate the heck out of me. In the very next pages, I'll post this coming week, "Lusk" gets quite a few scenes, so I don't think they misspelled Don Lusk's name. It may have been Ham Luske doing a scene.

I get a message saying: requested url could not be retrieved. Does anyone else have this problem? Would love to get hold of the drafts..

Hey Jenny,
Brian Mitchell here from NY.....Hope you've been doing fine.
Great blog and mucho thanks for all the great posts.
I can confirm that Don Towsley and Don Lusk are the other animators.
Lusk is credited all the way up to 101 Dalmatians.
I know Ward worked under Luske for a couple of years and it's possible Ham picked up a scene here and there.
You inspired me to put up some Kimball stuff on my blog at http://mitchellsketch.blogspot.com/