The Brilliance of Winsor McCay 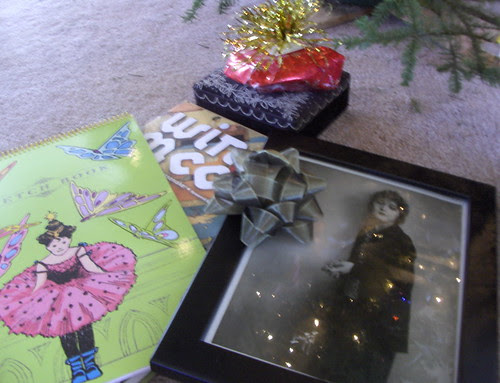 Among the gifts I was lucky enough to receive this year was the enormous volume Winsor McCay, His Life and Art, a much-revamped edition of a book originally published in 1987, compiled and written by John Canemaker. Everything that Canemaker publishes is worth owning; his writing is elegant, his scholarship extensive, and his frankness refreshing.

I first discovered Winsor McCay in a pile of damaged books, magazines and various other ephemera at Collector's Bookshop, back when it was in a bank building on Hollywood Blvd. There were stacks of damaged copies of a large format book of "Little Nemo In Slumberland", cheaply priced. I loved the drawings at first sight, took the musty, flaking thing home, and spent hours in Slumberland with the products of McCay's pen and wild imagination. There's never been anyone like him as an artist, and it's almost impossible to believe he had as little formal training as he apparently did (although, according to Canemaker's research, what he did have was certainly good instruction, all too difficult to come by now).
Talk about appeal...there's so much eye candy on any one of his pages that it fills one with a real, palpable sense of pleasure. His ink lines, his characters and his worlds are amusing, charming, exciting, delirious, beautiful...and fun. I've also always gotten a kick from his curious, idiosyncratic use of dialogue punctuated by lots of "Um!"s and "Yes!"s at the end of sentences...strange but somehow plain and real in his small-faced characters' mouths.
A short time after discovering that dilapidated Nemo, I saw "Gertie the Dinosaur" and "The Sinking of the Lusitania", two startling achievements in animation that couldn't be more different. Even back in that stone age of my understanding of animation, his films were eye popping. Smooth, brilliantly accurate drawing, not to forget in the case of the immortal Gertie personality. Gertie has never dated, at least not in the many screenings I've attended with various audiences(not always the usual fans either), because she is so charming, and shows a naughtiness and sense of humor one wouldn't normally expect of a dinosaur, never mind one from 1914. 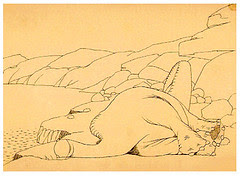 McCay seems as though he was a strange man...ordinary in many things, save his imagination and incredible artistic ability; when he drew, he drew as a giant would--even his political cartoons present an authority that is godlike in its masterful presentation...no mere doodles, they. Although speaking of doodles, there are some priceless illustrated letters in the new book that are no less wonderful for being dashed off. If you give a toss for drawing, you really want this book, believe me.

The seperate Gertie drawings are so beautiful in their own right. All the detail in the background that had to be re-drawn over and over again. It really is amazing.

Yes, it's stunning...no one--I mean nobody--could have retraced those drawings with the accuracy of McCay...what an insanely gifted man. I've seen some of the original drawings for sale at the ComicCon over the years, and you're right--they're beautiful as individual pieces.

On a Winsor McCay DVD I have, Canemaker interviews the fellow who assisted McCay on Gertie, his job being to trace the backgrounds on all those drawings.