I found this while tidying up recently:

The reverse is a map of the studio: 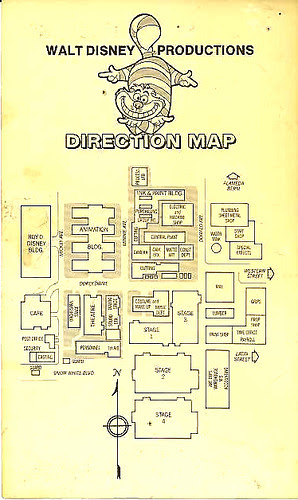 When I was issued this pass the studio was a completely different place than it is now. The animators were sitting at their huge desks in the Animation Building that "Snow White" had built for their predecessors, working on "The Black Cauldron". The charming, faux-1900 houses used in every Disney film of the 1960s still stood, as did the western street, and a beautiful, large town square had been recently refurbished and embellished at some cost for use in "Something Wicked This Way Comes". The commissary was dirt cheap--the prices seemed almost unchanged since Walt's time--and the entire lot had a lovely, low-key feeling.

I love the depression era girl drawing below! Can't wait to see more.