Last weekend, thanks in large part to three consecutive days off, I was finally able to watch a few screeners. One of them was Hayao Miyazaki's "The Wind Rises", which I'd been very much looking forward to(happily subtitled instead of dubbed-always the way I prefer to go).  I knew the basics of the story-that it was about the life of the designer of the Japanese Zero fighter plane, Jiro Horikoshi, albeit somewhat fictionalized, and that as a result it was a more "adult" sort of film from Miyazaki-but that was all.

The next two hours were a revelation. I loved "Spirited Away" and enjoyed the somewhat-contentious-among-my-friends charms of "Ponyo", but sitting through "The Wind Rises" gave me the same sensation I had watching my first Miyazaki films-"Totoro", "Nausicaä ","Kiki's Delivery Service", and "Porco Rosso"-the wonder of watching a graphically told story play out with absolutely no idea what might happen next, thinking, "I can't believe how beautiful this is".

And one of the first things I thought was "I wonder what Michael Sporn thinks about this. I have to visit his blog(or as he called it, Splog)". But my first stop upon pulling out my laptop was Facebook, where the first post I saw was one expressing sorrow that Michael had died.

Both Michael and I started our blogs in the fall of 2005; I quickly discovered his thanks to comments he left on my posts. Of course I knew who he was, thanks to John Canemaker's The Animated Raggedy Ann and Andy , a book that served as my introduction to Richard Williams, Corny Cole, Tissa David, the ins and outs of feature animation production, the animation artist's life, the history of some veteran giants in the business, and last but not least a great introduction to a gaggle of young artists just starting out-including Eric Goldberg, Dan Haskett, Tom Sito, and Michael Sporn.  All that, and fantastic illustrations and photographs. It's quite a book(in my opinion the most honest and accurate about the behind the scenes of animation production), and though out of print, still very much worth getting and reading, as are all of Canemaker's titles. 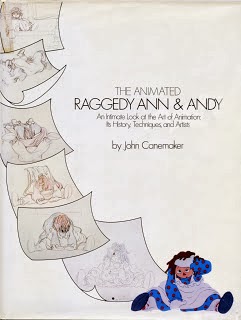 Of the young guys profiled in "Raggedy Ann", Haskett, Goldberg, and Sito eventually made their way to the once and future mecca of feature animation, Los Angeles. Michael Sporn stayed in his native New York and started his own studio-a studio that has remained in operation for 34 years. That's a pretty astonishing feat both personally and professionally. In fact, I doubt if any of the animation production houses that existed in 1980 exist today, or have for many years. The economy, changes in the tastes and whims of commercial production, dwindling funding for projects from PBS and other entities...all have contributed to a depressing attrition rate for independent-minded artists and companies. Add to all that the ever-skyrocketing costs of living and working in New York, and the fact that Michael maintained his studio and thrived is a wonderful thing.

Michael Sporn Animation, Inc. did so much work, in so many styles and on so many different projects-television, film titles-even an animated segment for a Broadway show. There's far more than I can detail here in this post right now-but go and have a google. Recently Michael had started work on "Poe", a personal project that looked fantastic.

So I knew him from his profile in the book, I'd seen his work(often not knowing it was his)on television, but what I didn't know-until I began reading his indispensable Splog, was what an incredible animation historian, scholar, and fan he was.  I'd started my blog to discourse on animation's past, mostly, with a few posts thrown in on story-my gig-and whatever else. I've acquired ephemera from anything and everything that interested me, whether it came from Disney, Warner Bros, Bob Clampett...and I began to post these things I pulled out of my drawers. One I recall in particular was a candid photograph of a very uncomfortable Walt Disney, taken when he was testifying for HUAC.


This and other things brought comments from Michael, and led me to what he had been posting about.Ye gods! The man had amassed an incredible trove of material-all the good stuff, from every studio-not just Disney, but UPA, not just America's cartoon industry, but Europe's...he just seemed to have a line on everything. And he'd worked with everyone and he was interested in everyone. Believe me, his blog is filled with years and years' worth of priceless material-in addition to his own archives, he was often lent incredible stuff from his friend and fellow New Yorker John Canemaker. if you have any interest at all in animation history and art, do yourselves a huge favor and search his posts.

Did I say animation? That subject garnered the lion's share of his focus, but he posted almost as often about life in New York, using photographs he and his friends took around the city. There's a whole book, or two, or five in that blog, and every one of them is a wonderful read.


Start anywhere, or do a search via keywords, or read the listed subjects on his sidebar and go to town.

Michael was opinionated. Honest, expressing his thoughts on all things including animation old and new in intelligent, often brutally tough terms. What does it say about a writer when you disagree with him vehemently about something, but like and admire him just as much or more at the end of some serious excoriation as you did before you started?

In 2009 I was in New York and shot him an email that I was in the neighborhood. He replied immediately, inviting me to drop by his Greenwich Village studio. I did, thinking I'd impose on him for just a few moments. Three hours later I hated to finally leave. We must have talked nonstop about everything under the sun. I felt as though I'd known him for years. I'm so grateful for that visit.

As is plain from a glance at my own sidebar, my posting has fallen off quite a bit since 2008. Some of the reasons for that are personal, but mainly it's been professional-the energy it takes to write the way I like to, on the subjects I want to, is harder to come by and I've found I've used what I do have on mostly offline pursuits. I'm always meaning to rectify that, but along with blogging less I also have done much less browsing-including, shamefully, two of the blogs I consider essential for their content on animation-Michael's, and Michael Barrier's. Fortunately for me Barrier's is possible to catch up with, but Sporn's output was so prodigious that I'd dip in, look around, enjoy myself, and just never got caught up completely. As a result I missed the odd posts he'd made that (barely) alluded to his illness, and completely missed the few photographs that clearly showed how sick he'd become. The posts I did read were still vibrant, angry, celebratory, and as full of the joy of life and art as any he'd ever done.

And yes, he'd written about the Wind Rises, and of course, he'd loved it as I was certain he would. In November he wrote:


With The Wind Rises he has made an adult film it’s the only way he could tell this tale. He also complicates the structure of the story, and despite the fact that he will not get the largest possible audience, he wants to be sure every aspect of the complicated story is told. This he does. He ignores a large section of the audience for the sake of making a richer story.
His work on the two films, in my mind, can only be seen as the work of a genius. His story is as full as it can ever become, yet he disappoints a small part of the audience searching for the obvious. I can only credit the man, the artist. I also take away very deep lessons about his artistry and what he wanted to do with it. I’ve seen Ponyo half a dozen times with full joy. With The Wind Rises, occurring post Tsunami and post nuclear meltdown, I am sure he has plenty to tell me, and I will see it again and again until I’ve gotten all of its pleasure.
Most prominently I believe he wants to be heard about man’s inhumanity to man. Despite all the natural disaster and chaos in our lives, he uses a man intent on carrying out the best war to get the full tale told. His method is enough to make me tear up, his story goes even deeper.

A few days later he posted:

Don’t worry, I’m not done with the blog.
I’ve got some things planned and it could be as soon as tomorrow that I pass them along.
I’ve had some weird stuff going on in my life and I’m just trying to get past it.
Hang in there.
Michael

Those conversations I was going to have with him are going to have to wait a while. I'll definitely talk about "The Wind Rises", and probably thoroughly embarrass him when I tell him again how much I love his blog and work, and how much he's been missed.

Lovely tribute Jenny-I miss his blog posts too. Wish I had gotten to meet him.

Thank you, Jenny, for this post. Sporn's blog was an inspiration. He did so much work to educate the animation community and help us appreciate things we might have missed otherwise. I didn't know he was gone either.

Michael Sporn indeed ran one of the finest animation blogs on the net. His words added a much-needed East coast voice to the ongoing animation conversation. I never got to meet him but envy your experience. If the man was a fraction as entertaining and articulate as his Splog face-to-face, you must have enjoyed a most wonderful three hours in Greenwich Village on that day in 2009.

I posted amid the mass reaction to Michael's passing on his blog but for some reason my comment is still awaiting moderation. It would have been number 21 in that long stream of emotional release from his devoted readers.

We are all going to miss Michael so very much, more than we probably realize. Thanks for your tribute to him. I was lucky to be able to call Michael a friend, and I was very fortunate that he chose to post many of my photographs on the Sunday blogs. I considered it a great compliment that he would include my stuff, especially since the main focus was animation. I have to say, though, that I don't recall taking the photograph that you attribute to me above. Sometimes Michael mixed in his own images along with mine and was not always exact in delineating which were whose. I suspect that he took the one with the undulating wall of red. I just wanted to be sure that proper credit was given. Thanks again for your kind thoughts about a wonderful, talented, caring and playful artist. Steve Fisher.

It was pretty horrifying news to read last week (and like Tom, my comment is still awaiting moderation). But I'll just repeat it here... Long live Michael Sporn.

Thank you Jenny, that was quite a touching tribute.