Adam and Dog: The ineffable beauty of drawn animation

bəl/ Show Spelleadjective
﻿﻿1. incapable of being expressed or described in words; inexpressible: ineffable joy.
One late night about eighteen months ago, my officemate and fellow story artist Justin Hunt walked in with an animation sequence under his arm. It was old-school 2D, immediately identifiable by the sandwich of paper and cardboard secured with extra-long rubber bands. Here was something novel! Surrounded by cintiqs and working on cg films in studios where prosaic objects like pencils and paper are barely in evidence, just seeing a sheaf of hand drawn animation produces plenty of thrills-and I hadn't even bugged him to flip it for me yet.  When he did, I became more and more interested; the drawings were lovely. Just based on that one short scene I wanted to see the whole thing, though I'd have to wait a while. And I wanted to know why and how it was being done.

It turned out that Justin was one of a small, tight-knit group of friends helping Minkyu Lee complete the animation for a short film he was writing, directing and storyboarding, and animating. And designing, and painting all the backgrounds.

I first wrote about Minkyu and his film "Adam and Dog" a year ago, just before it won an Annie award. It was in an earlier, slightly unfinished state at that time, but the elements that make it the wonderful film that it is were all solidly there. Now it's another year, and it's one of 2013's five nominees for the Academy Award for animated short.  It's a richly deserved nod, and as I'm one of the corny ones who actually believes the old canard that the real honor is simply in being nominated by one's peers(in this case, members of the animation branch of AMPAS), it's already a winner, as are the other 4 shorts in that category.  But this film is special to me; it pushes all my buttons, and I thought I'd have a go at explaining why. ﻿﻿﻿﻿﻿
It's not necessarily difficult to make drawings move, but it can be well-nigh impossible to make them real-to live, to breathe, to exist on their own terms in whatever world the filmmaker decides to present them. The Story of Adam and Dog is simple, and all the more powerful for being so: The Fall from the point of view of the first dog in Eden. Although, being a dog, he sees and understands nothing so much as the joy of finding and bestowing all his loyalty and love on the first human being he meets and bonds with(and eventually, it's hinted, the second one also).

What I've described has the potential for a charming story, and a sweet and clever short could have been made that was just that and nothing more. But-and here's the thing that's so difficult to describe as cogently as I'd like-in this case, this film has been crafted with every element contributing to a result that has the layered, emotional impact of the very best of any sort of animation, short form or long. Or any sort of film making, for that matter. What's called traditional character animation-that is, drawings and paintings in two dimensions-just aren't featured in this sort of style anymore, and by style I mean not just the lushness and soft, illustrative quality of its look, but the serious, thoughtful and truly unique pacing, the choices of shots, the editing. I think it was the pure film making that Minkyu employed that really bowled me over, beyond the visceral pleasure I took in seeing drawn characters inhabiting a believable world, living and breathing(the animation, by the way, includes not only Minkyu's work but also beautiful footage from James Baxter, Jen Hager, and Matt Williames, among others). 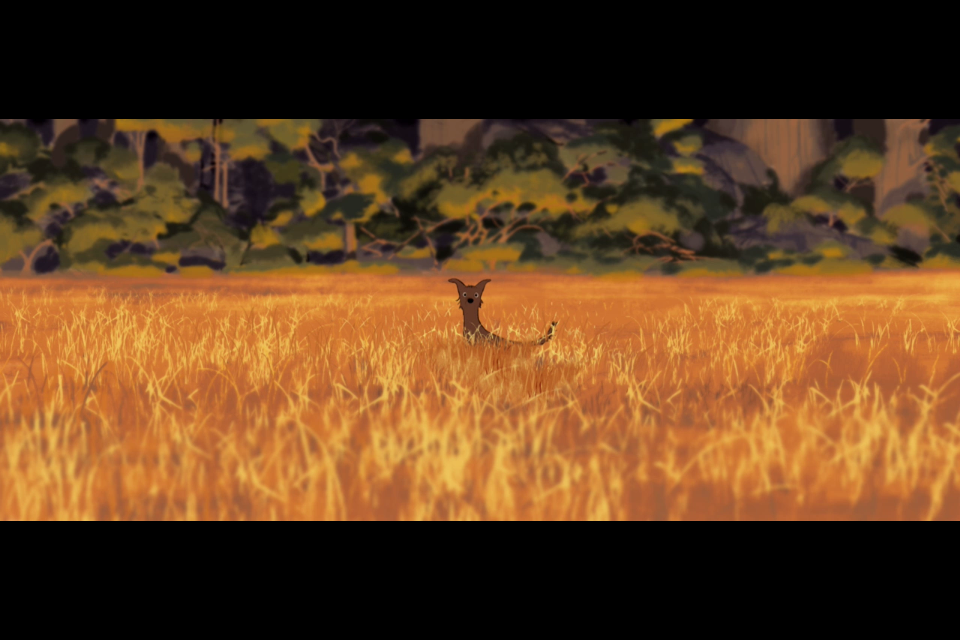 There's no dialogue, although there's plenty of sound-wind, rustling grass and trees, the shudder of various animals pounding through the forest or swimming through deep water. Dog wanders alone through Eden, acting in an immediately recognizable doggy manner: marking gigantic trees, play-hunting through tall grass, running and barking for the sheer fun of it-and none of this is played cute-at least, not by my lights; it's real and genuine. Dog's animation has no self-conscious posing, but neither is it "realistic" to the point of seeming merely copied from life. The dog goes day to day-or perhaps endless days, or an hour-alone, until he spies Adam-who sees him in almost the same moment. It's a more momentous exchange for dog than man, but eventually they become friends. The idyll of Eden can't last, however, and the dog must make a choice.

This is a micro story directed in macro fashion, made big without pretentious allusions or grandstanding. I can't remember when I've seen something done on this scale, in this form, fashioned with such wise taste apparent in every choice.  Even after repeated viewings I still tear up a bit, not because of a piece of lovely character animation-something I'm always a sucker for-but because everything that's going on-shot choice, length of shot, expression, color, perspective. movement-combines to produce that effect in me.

This is one of the things that I loved about animation when I determined to do it for a living; I mean specifically the sensitive, carefully calibrated story that is outside the mold one way or another. Or if done within a very commercial framework, manages to fire on all cylinders entertainment-wise while being a work of art at the same time, or, perhaps more realistically, having moments that satisfy on that level. This 15 minute short happens to be animated, but it employs an approach that at first viewing reminded me of Terence Malick (not surprising as it turns out, since Malick-along with Sofia Coppola, Tarkovsky and Godard-is one of many directors Lee admires), specifically the lyricism of "Days Of Heaven".

And this is from a workaday visdev artist, on his own time, his own money(the budget is small by the standards of any short of this quality),with friends' help, To serve his own artistic vision. The result exhilarates, inspires and shames me in just about equal measure. I'm just very glad he made it. 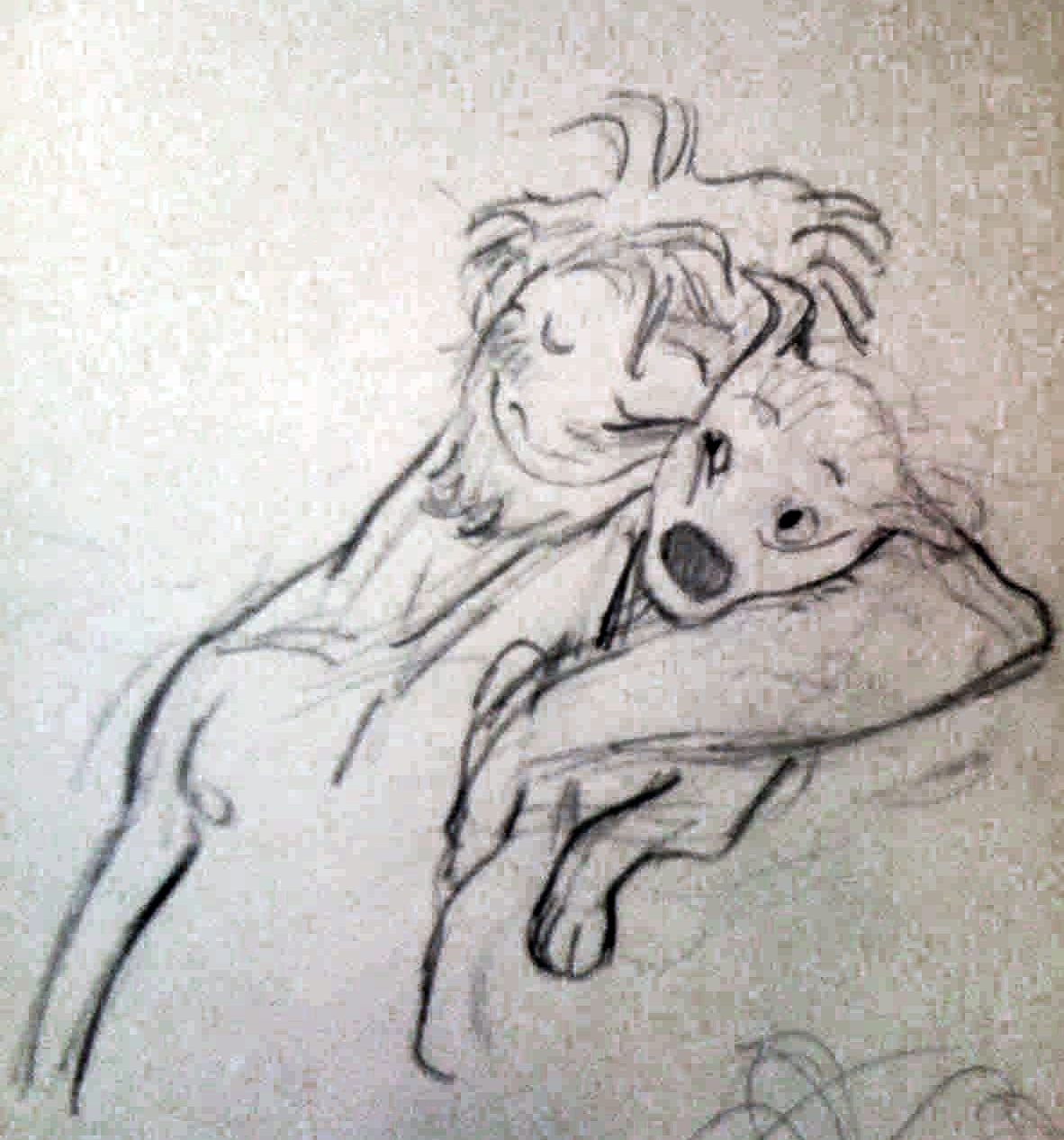 I'll write a bit more with quotes from an email exchange between Minkyu and myself in another post. In the meantime, have a look at "Adam and Dog" if you can.  It's indeed an ineffable film.

It made me cry the first time I saw it! I loved the dogs character design, so effective in its simplicity.

Great write up I had a chance to see the film in theaters and I thoroughly enjoyed it.

I'm glad you highlight the pacing- it's so well judged- mature- I'm excited to see what Minkyu can do next!

You've hit the nose on the head regarding this film. The hand-drawn images are so beautiful that the film rises above everything else out there (certainly everything else that was nominated for an Oscar.) the animation, backgrounds, layout and mood of all is just gorgeous. That trumps everything else I've seen in the past year. (My only gripe in the film was miniscule and slender - the size relationships of dogs to elephants.)

I will wait and watch for anything else Minkyu Lee does. I know I will be in for a treat.

Regretfully, I voted for another film in the half-hearted hope it would make a difference. Clearly, I was wrong.

This film is masterful, and I can't help but feel like a fool for hoping that other bloated animation sink hole would see the light.

Thanks for making this available. I've only recently seen Adam and Dog for the first time (I'm a huge fan of classic 2d animation). It was breathtakingly beautiful. The simplicity, the art - the pure style and emotion. BRAVO! We need more of this in the animation world.