Actually, every scene DOES get the storyboard treatment 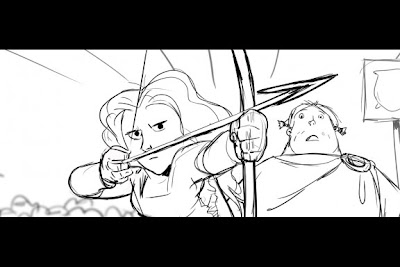 Time magazine's online edition has a "behind the scenes" slideshow featuring Pixar's next release, Brave. Worth a look to see some nice photos of the crew(including one showing directors Brenda Chapman and Mark Andrews on a Scottish hillside covered in heather), but the accompanying captions by Jared Miller include one major error. Alongside a story panel from the sequence "The Prize" Miller writes[emphasis mine]:

Not all scenes get the storyboard treatment, but this one, called "The Prize," closely matches the scene as it appears in the completed film.

It's an odd aside, one that really only makes sense in live action where, as a matter of course, storyboarding is usually reserved only for particular scenes and sequences. As readers of this blog know, animated features are storyboarded from start to finish, top to bottom, left to right and every which way imaginable, over and over and over again. All the scenes in Brave did and do "get the storyboard treatment". Mr. Miller's assertion that it's not done for every scene is a major boner...if you're a story artist at least.

Not incidentally, the sequence as boarded is an impressive one-and the panel above of Merida taking aim is from the Time feature. There'll be much more of the boards in the forthcoming Art of Brave book. Available for pre-order now at a generous discount-a handy link's over there to the right. Yes, I just had to mention that.

Not to spoil the Art Of book, but who boarded that sequence? It's fantastic.

If I order the book through Amazon, how will I get it autographed? Do you know whether the author will be offering signed copies through her website?

I just got "Art of Brave." Excellent job. Also, love your blog.
Thanks for doing it! :)
-G

Hi Jenny,
Love your site! I try to visit it when I can... great historic animation facts and stories!

You don't have to post this comment... I just wanted to point out you might want to correct a word in your post. I think you meant to write, "Mr Miller's assertion that it's not done for every scene is a major BUMMER," but instead it says something else that takes on a whole new meaning. :)

Again, love your blog, and congrats on the Brave book!
-Wayne