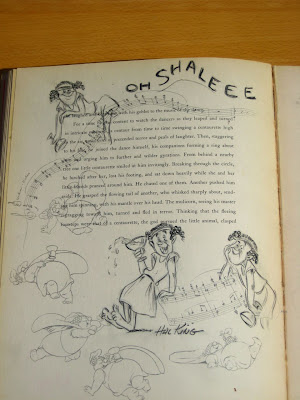 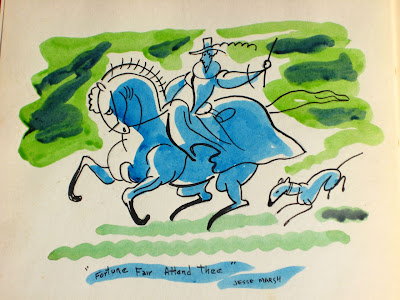 I'm guessing that Milt Kahl's piece says "I can do almost anything that any of you other bastards can do" Might not be 100% accurate. All the same...still brilliant!

Milt's line is "I can do almost anything that any of these other bastards can do"(if you click the picture it'll show the entire image-sorry about the cropping).

I think he's referring to Ward's drawing her the "gay 90's"-style risque image and if Ward did one in that mode, well, so can Milt. ; )

Ah, yes. A term of endearment Milt Kahl had for his friends and colleagues at Disney.

He also knew he could draw better than the rest of those "Lazy Bastards."

Those old guys were such fun.

Holy Mackerel! Nice drawings!!! Thanks for putting these up!

Thanks for posting the pics. I'm half a world away working in Iraq for a little while and your blog helps give me some sanity.

Do we know what Sally Holmes did at Disney before she left ? The eBay seller of the book says she left the studio in 1946

But I just noticed a comment over on the Disney History blog (Didier's blog) from a person called "OnTheLot" who says:

So , my question : does anyone else know if this is the same Sally Holmes ? (seems likely) She was a part of the dread Sleeping Beauty layoff of '58 . Does anyone know if she stayed in animation or was that all folks ? I hope "OnTheLot" will give more details , either here or on Didier Ghez's blog.

1958 seems wrong. I was in animation during the time and I don't remember Sally Holmes.

I'm guessing she left the studio in the forties. Milt Kahl even drew himself with hair. He didn't have hair by the time I got to Disney in the fifties.

What great artwork! I can always count on you to find the treasures.

My directories place Sally Holmes at the studio in Burbank 1n March 1945 but not in July 1946. Thus her leaving in 1946 seems very plausible. (She was not among the 1941 strikers.)

Some very well-known names, many completely unknown ones. But this IS the Animation Dept, NOT I&P. Thus, short of her being a secretary, she seems to have been an assistant (for Geo. Nicholas, maybe?) or inbetweener...