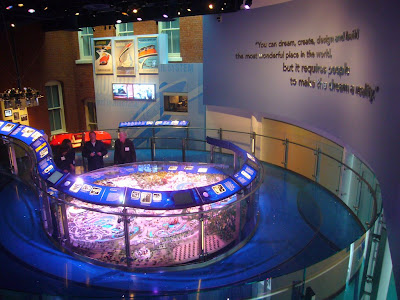 Thanks for your insights, Jenny.

I'll be heading north in a few days myself. It's going to be a Disney/Pixar week.

Great post. We just got home last night from the preview parties and our eyes are still spiraling round and round. The museum is gorgeous, and dense! Lots of layers, and lots of opportunities to lose yourself in the wonder of it all. I can't wait to go back. Looking forward to reading your impressions, Jenny.

Love that pics of Walt Disney. :)

I'm so sorry I missed seeing you at the Museum soiree. I'm glad you had a good time, and that you enjoyed the Museum. You saw your photo, didn't use?

And now to answer your query: the black-and-white storyboard sketches from MARY POPPINS were done by Dale Barnhart.

Jenny, I remember seeing sketches like this one of Mary Poppins in the offices of Bill Walsh and Don Dagradi. Wish I knew who made them. I'm just not sure.

How exciting! Jen Bobby Eberz is moving back to San Fran, I'll have to tell him! Hope you're doing well!

I just went to this museum over the holidays! Absolutely fabulous place! Above comments are right, it is VERY dense - there's so much to look at, its almost impossible to take it all in in one go. I especially loved the Mary Blair originals and background paintings :D Thanks for this posting! without it, i wouldn't have known the museum was even there! :)

Don DaGradi, didn't he do most all story boards on Mary Poppins ?