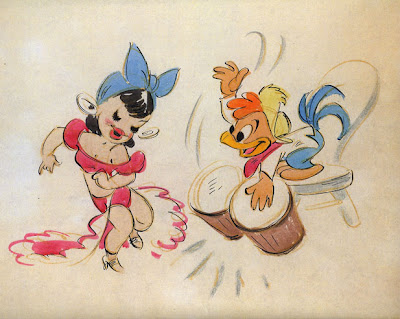 Many moons ago during the Fred Moore marathon here I posted some terrific rough character drawings Fred Moore did of this little Cuban rooster.   Here's one more, perhaps one of the best.  As with the vast majority of the others this is from the collection of James Walker--a man whose generosity (as well as his love of Fred Moore's appealing drawing)  is boundless.  A little end-of-year treat for readers of the Blackwing Diaries.

At the time I knew only the sketchiest details of the project they were created for, but thanks to a post by Wade Sampson that you can read here, I know more.  Fred Moore...in Cuba.  Something tells me that trip would make the wild spree in Guys and Dolls seem like a girl scout bake sale. But as nothing much has ever been said about it before to my knowledge, perhaps not. Either way, Fred did some wonderful work on that trip that shows he still had it in '46-about the time he was fired from Disney's.
As Sampson mentions, Disney historian J.B. Kaufman has been working on a book about all of the Disney Good Neighbor/Latin American films; after seeing the Ted Thomas documentary recently I'm especially looking forward to its seeing print.

Beautiful piece Jenny! Thanks for sharing.

I've been meaning to ask you, Jenny... I recently picked up a double-feature DVD of Saludos Amigos and the 3 Caballeros. I'm not sure if it's new, because I normally would Netflix The 3 Caballeros alone.

It's amazing. They have a great behind the scenes film with the Disney artists flying down to Brazil etc... to research the film.

There is an interesting "snipit" from an interview with Walt Disney. It almost shows the "studio exec" in him. He alludes to the Three Caballeros not pulling in what he hoped.

Anyway...my question to you (if you ever get to see this DVD behind-the-scenes film) is: Is that Mary Blair featured with the artists? It looks like her. I recognize her paintings. I think it's her, but I'm not sure. There is a cool shot with (her) playing this fast tempo'd hand/coin? game.

You should check it out!

You should definitely see the "El Grupo" Ted Thomas documentary if you get the chance--it uses an awful lot of the great kodachrome 16mm home movies Walt shot down South...as for Mary Blair, she was certainly there on the trip--the only woman artist I believe--so it could well be her you spotted(in those days she wore her hair shoulder length, with bangs, and usually very elegant, moderne 40s couture). Thanks for the tip!

And Dave, thank you!
I am still doing a post on the excellent sketchbook--next one up!

Fantastic and fun drawing. I like the Samba girl, a perfect Fred Moore girl.

It's true I can ear samba while looking at that drawing.Thank you Jenny