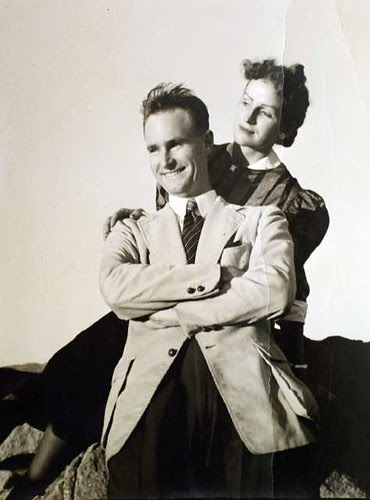 A really nice photo of the two. Thanks for putting it up!

See how confident they look. It's like they could take on the whole world. Thanks for the link and the pic!

Great pics. For more info on the Blair's and as well background info on several Disney art Directors and as well as the wellspring that a lot of animation folk came from you should try to get copies of :

Kevin Blair's passing is, indeed, a sad note. I'm surprised it's not been more duly noted. He spent the better part of the last years of his short life protecting, cataloging, and promoting the Blair family's legacy and artwork.

I did not know this :

"Although nearly forgotten, the Olympics held from 1912 through 1948 included arts competitions, with the winners receiving the same gold, silver and bronze medals as the athletes.

In addition to Blair's category -- he won for a watercolor called "Rodeo" -- there were medals for oil painting, sculpture, architecture, music and literature."

What a great idea ! It is too bad this part of the Olympics has been discarded and forgotten.

The article lays the blame for eliminating the arts medals at the feet of Avery Brundage, who came up short in a sculpture competition years earlier.