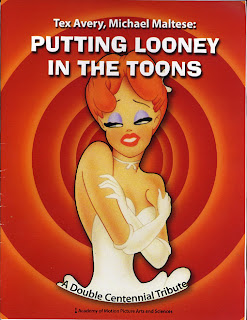 My friend Sharon Colman asked me to an evening put on by the Academy last Monday. I accepted immediately and it's a good thing I did(and that Sharon thinks ahead)because by the time 3/24 rolled around the event at the Linwood Dunn theater had completely sold out.

I think the practically-new Dunn theater seats 600, but the staff was resorting to pulling out folding chairs and holding up the start of the program to try and accomodate everyone. Just before the lights went down Tom Sito was spotted doing a Grouchoesque run in front of the screen heading for the last of the seats. I saw Dave Smith, the longtime Disney archivist, and Jerry Beck(natch). There were enormous gourmet cookies and coffee beforehand, but no one needed caffeine to last through the 14 shorts. Joe Adamson, an author and film historian I greatly admire, chose the cartoons screened. Joe would win my undying gratitude if all he'd done was write "Groucho, Harpo, Chico and Sometimes Zeppo", in my opinion far and away the best book about the Marx Brothers(and absolutely the funniest). But he's also done a few other classic titles, most notably Tex Avery: King of Cartoons" and "Bugs Bunny: 50 Years and Only One Grey Hare". 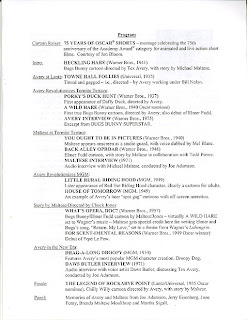 The evening's program; CLICK the image to open in a larger size

It was a good selection. I'd seen all but one of the shorts before(as had Sharon). Some I'd seen many, many times. As great a cartoon as it is, I'd have said beforehand that I could probably skip "What's Opera, Doc?" only because I have seen it about 3,000 times--and I'd have been wrong in my imagined saturation-point-reaching. Because for all those viewings I've probably only seen it on the big screen 3 or 4 times. What a revelation. It's incredible to see Maurice Noble's color and design the way he meant them to look. And of course there's the added factor of having a real, large, live audience.

I love the romance and mystery of the film experience. It's kind of sacred to me, if that's not too strong a term. You sit in utter silence(well, hopefully) in a darkened theatre, the curtain parts, and you hold your breath a moment. And boy--the beauty, spirit and vibrancy of that Warner Bros cartoon shield leaping out at you accompanied by the most terrific studio orchestra ever...that's got to be the king of all intros. It's interesting to enjoy it today, in the respectful company of hundreds of AMPAS members and cartoon fans, and think of how those guys--Maltese, Avery--felt about their careers while they were working at them.
The program (whose cover is pictured above) contains a couple of excellent essays on the honorees, both offering food for thought and perspective. By the early 70s Tex Avery was a bit of a broken spirit due largely to tragedies in his family life, and he apparently considered his brilliant work for Warner's and MGM as just so much silliness--disposable, even "embarrassing".

It's one of the merits of our latter-day media overload that we now give Tex Avery the credit he earned and deserved as a genius of film comedy and an animation innovator. He wasn't completely overlooked at the time, certainly--but his reputation was mostly limited to his own small industry. He didn't break out beyond the confines of a tiny community in notoriety as, for instance, Frank Tashlin eventually did--but Tashlin left animation for live action and thereby merited wearing long pants, figuratively speaking, in the eyes of critics and writers--and even then, he too remained in yet another segregated category, comedy.

Added to the cartoons shown Monday were a couple of clips of both men reminsicing--Avery from "Bugs Bunny Superstar" and an audio-only clip of Mike Maltese spinning away in a distinctly New Yawk accent. It was especially nice to have them represent themselves a bit among their own work. After the shorts a panel of colleagues and one daughter--Maltese's--sat in front and offered their thoughts. Stan Freberg was a last minute additon to those listed in the program and reincarnated his voice for Pete Puma, as well as recounted his entry into voice acting(although he and/or I were fuzzy about the dates and circumstances--somehow he had Bob Clampett standing next to Chuck Jones at the time he auditioned for Pete Puma. Not too sure about that!). The speakers' remarks all gave the honorees that much more of a real presence, although there's no doubt their work spoke loudly for them. What a unique legacy is the short cartoon.

I have to do a plug of sorts for one of my favorite organizations: the Academy does a full roster of great screenings and programs open to the public--as is their fantastic research library located in Beverly Hills. The Dunn theater complex is a relatively new addition, and its location makes the Academy events there all the more accessible and attractive to attend. And the tickets cost about $5. You can't miss. Usually the only attention they receive is for the glitzy TV show that's on every spring, and that's understandable--but they do a lot more, and it's a resource we in L.A. should really take full advantage of.
In the foyer on the Dunn theater, by the way, there was a great display of vintage and modern matte paintings. A must see if you're in the area.
ADDENDUM Indispensable animation pro and blogger Hans Perk, who was also present, reminds me that it it's also the 100th anniversary of another cartoon great: Mel Blanc. In additon, clicking on Hans' name will take you to his own list of other animation notables who'd be celebrating their 100th anniversary in 2008. Check it out..

They mentioned that it was also Mel Blanc's 100th, though there were a lot they didn't mention.
It was a fun night, though, even though many of the films were screened on video and the best one third of the chairs were reserved for guests of the guests..

Thanks Hans! You're quite right-I forgot to add in the announcement of Mel Blanc...and I loved reading your own list. I've added a note about it in the post.

I suspect you disabled comments for the previous post for a reason, but I'll offer condolences none-the-less. If you prefer not to publish this one, I understand completely.

I've found your blog to be very illuminating and am glad you've come back to writing it.

Wow, sounds like a great event, glad to hear that it sold out - it's good to know so many people still care about that kind of stuff! I'm glad that Maltese is finally starting to get some recognition...he was truly an amazing talent.

Thanks, Mark! You're so right about Maltese--I'm kicking myself because somewhere I have some xeroxes of his story sketches--they were copied and passed around a lot and I'll bet you've seen them too. Of course I can't find them, darn it. Would have been the perfect place to post them, along with this event.

Anonymous: you're right-I disabled comments on the previous entry because I didn't want anyone to feel that they had to write something or make any kind of response. It's a tough thing to know how to respond to for a lot of people, and I don't blame them-I've been on that end, too.
In posting I really felt I was just sending a tribute out into the ether. As I wrote, I felt ambivilant about it but I'm glad I did it. I've had a sort of silent partner in this blog since it started, and I had to write a bit about him.
I'm grateful for your readership and enjoyment and for your condolences. It is much appreciated.

My condolences too, Jenny.

It sounds like a great show, though HOUSE OF TOMORROW would have been better for just an all Avery retrospective. But you gotta love how he gave the audience what they wanted at the end!!