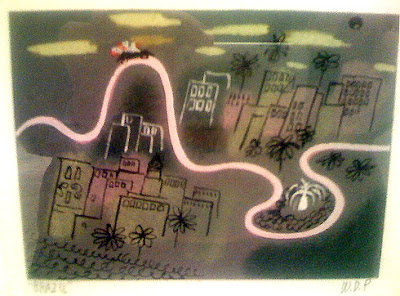 You are absolutely right about the Blair exhibit (which I've seen three times already and plan to re-visit)!

From the books about her we have learned that she was a skilled painter and a woman of ideas, but seeing her work up close affirms how bold and innovative her visual storytelling truly was!

Backed up by such confidence and originality, her work remains untouchable, if much imitated!

I'll be in San Francisco all week, so I'll be stopping in.

Great post, Jenny! You're so fortunate to get to see that stuff in person...truly inspiring.

Way cool! I've been meaning to go there next time I'm up the coast, so this is one more incentive. Nice to see Gladys Parker's work - she drew the wonderful "Mopsy" strip, always a fave of mine, and the singleton "Flapper Fanny" was a hand-off, started by the talented Ethel Hays, of "Marianne" fame - those flapper strips that women drew were always more visually interesting than anything the men ever came up with.

It's a great little museum ... but your post reminded me I need to visit a bit more frequently -- especially since I live less than 40 miles away.

Jenny, I hope you were able to connect with NorCal animators from Pixar and DreamWorks during your visit and had a great time in Baghdad by the Bay.

Jenny I absolutely agree with your assessment of Mary Blair. The exhibit is a cannot miss. I was also amazed at the Will Eisner Spirit page.

I saw the display back in November when in town on Disney Family Foundation business.

I absolutely loved the vibrancy of the colors she used. My favorite pieces were the Baby Ballet conceptual piece from Fantasia and the men on horseback with the red capes from Cinderella.

After seeing her art in person, I have a newfound appreciation for her style.

Thanks, everyone, for the comments!

mnmears, my entire week was spent at Stanford on family business, so I wasn't able to call or see anyone, alas. The S.F. trip was a spur of the moment thing(which we were so glad we did).
I drove right through Redwood City at one point and although I've been at Dreamworks now for over 5 years I've never yet been inside the place(which looks great in pictures). One of these days!

You know what I found a bit surprising was the Mary Blair book that came out a few yeas ago..it was so...thin. I was expecting some nice, thick "Nine Old Men" size book packed with art. Did you feel the same way?

I spent a day as a media guest at DreamWorks in Redwood City ... it's a very nice facility ... and the people I met all seemed to care deeply about the work they do ...

Hope to visit them again in the not too distant future ...

Hi Jenny! This looks like a great show. I had the opportunity to see a big Gorey exhibit at the Cartoon Art Museum, oh, at least 10 years ago, I'd say. Some of his work from the Dracula production was there then, including a model of the set. The other show on display at that time was a retrospective of Carl Barks' Uncle Scrooge McDuck.

The Mary Blair show looks terrific! I have to admit my ignorance and say that my knowledge of her is on a subconscious level at best, but these pictures are ringing a lot of bells.

Thanks for posting these! I didn't know they allowed photos (and thank goodness they did!). I can't wait to see the exhibit in person...

Nice, nice stuff! If only we could see these pieces in Los Angeles!

Superb post-looks like a tuly marvellous show & I'm glad I could experience it a little through your pics.
Can't wait to see the Gorey shots-

New Mary Blair art books are on the way from Disney Publishing. Hopefully, you should see some this year.

that s great ..thanks jenny...

Hello thanks alot for posting these! I'm a big fan of Mary Blair but I live in Asia 18hrs away from San Francisco so I couldn't afford an air ticket just for this wonderful exhibit. I really appreciate you putting up these wonderful art on your blog. keep up the good work!

When I had a baby 2 years ago in the Providence St. Joseph hospital in Burbank, across from Disney, in the maternity ward there was nothing but Mary Blair artwork on the walls. That's when I fell in love with her work. I don't know if it's still up there now, but it's worth seeing. They may not allow people up there to just roam the halls, though.