Happy Birthday, Ollie! With love and thanks for everything 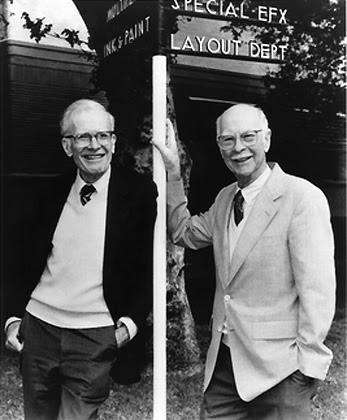 Thanks to an alert by John Canemaker, I know that today, Halloween 2007, is Ollie Johnston's 95th birthday.

Really, what can be said about a man on such a day when he's lived so long that he's influenced millions--both professionally and personally--and it's all been said before, often by people who knew him well, worked with him and love him dearly?
It's a tough one. I met Ollie just once at his home many years ago, shortly before "Illusion Of Life" was published. I saw him speak at festivals and animation events; mostly I know him through his animation, which has always entertained and touched me, and always, always expertly fooled me into completely and utterly believing his drawings were alive. 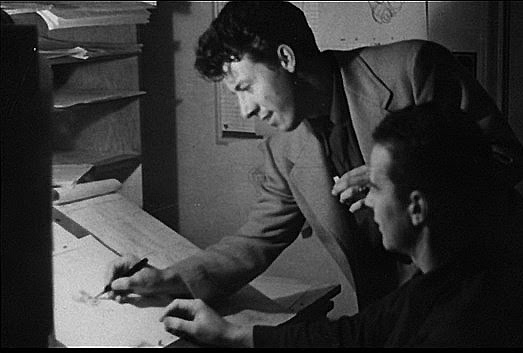 It's hard to find an image of Ollie alone in a shot--of course, for virtually all of his working life he's most often pictured with his dearest friend, the late Frank Thomas, as above. From David Nethery's blog I swiped the other shot of Ollie at his desk at the very beginnings of his illustrious career. Three guesses who's giving some guidance while Ollie looks on.

Indeed , Happy Birthday wishes to the great Mr. Johnston. (I blogged it too over on mine!) And I didn't even get an email reminder from John Canemaker ! ;-)

You're right, there's really not much more to add about Ollie's amazing career as an animator and author/teacher that hasn't been said before, but as I mentioned over on my blog , I hope that someone who is in communication with Ollie (John Canemaker?) will tell him about all the affection and good wishes that are being sent his way by us animation folk on this day.

I met him twice a few years back. He's a really sweet guy. Like a lovable grandfather type of guy.

Thank you for honoring Ollie on his birthday! It's been one of the joys of my life meeting that gentle giant of animation a couple of times and spending some time with him here in my native Germany.