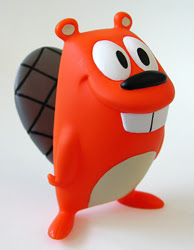 
ETA: Jeff's toy just received an excellent review at the Plastic and Plush blog. Congratulations again to Jeff for garnering such kudos.


I've been catching up with a lot of the blogs I link to lately--ones I mean to visit regularly but too often procrastinate checking in on. Since the Comic Con, however, I've had a new motivation: what did all those fellow travelers I missed seeing there think of it, and how did the sellers I know of do?

So I've been making the rounds and enjoying the stories and pictures. One entry particularly stirred me up enough to begin a post about it the other day, though I put it aside until I'd have more time. Oddly, an article in today's New Yorks Times offered a quote that fit the old post perfectly...so here it is--the post, first:

* * *
Jeff Pidgeon blogged about an encounter he had at the Comic-Con involving the vinyl "Happy Beaver" toy he designed and was offering there. Apparently a vendor expressed interest in this appealing orange guy, and asked him what the character's story was. Jeff was forced to admit that...well...he didn't have a story, exactly; he had drawn a fellow he liked the looks of and wanted to see as a toy(Jeff is one of the animation world's preeminent cool toy collectors, by the way--more on that in a minute).

This woman was kind of amazed that Jeff didn't follow the toymaker's script--how could he have bothered to commission a sizeable retail toy with no story for it?
He was nonplussed at the expostulating from this stranger...after all, he is a story artist of long experience(at Pixar, no less). Wasn't it okay for him to indulge himself in a fun project of three-dimensional toy design? Does every figural thing with eyes, nose and tail have to have a backstory?
* * *

Well, that was as far as I got the other day. I put it aside and reflected on whether or not I was making too much of this little anecdote, but it did needle me for some reason. Then I read this in this morning's paper an article about the over-management of children's play--of adults inserting themselves and their notions of what "play" should be into a private world where children would otherwise think and invent and fantasize spontaneously. Here's the passage that really popped out at me--the article is reported by Patricia Cohen. She's quoting a professor at Brown who's written a book about children's play throughout history:

"Mr. Chudacoff...explain[ed] that with so much commercial licensing, toys have become more of an offshoot of the television and film industries than elements of play.
One result is that a toy comes with a prepackaged back story and ready-made fantasy life, he said, meaning that “some of the freedom is lost, and unstructured play is limited.”"

Now, Jeff's vinyl toy isn't meant specifically for children, it's a fun object designed for adults like Jeff(and myself, and a passel of other animation people and artists)who enjoy fun objects around our environment for various reasons. Call it whimsy, maybe. But I think part of the reason that we do enjoy these things is that they both please our sense memories of childhood play and at the same time keep striking those synapses that we use all the time in our work. Stories beget characters--but also, very often characters beget their own stories--ones we couldn't tell until we get to know their players a little better. That's what I'd surmise about Jeff's character--why it isn't a boo-boo to have gone so far as to create him without The Story at hand, readymade, to reel off to a wholesaler or bystander. Jeff might well disagree, however.

Anyway, there is no hard and fast rule to this. It goes back to that old question" "where do your ideas come from?" Where? It's part nature, part nurture, part--who knows what?

And speaking of toys, for anyone with a passing interest in the glory days of strange and wonderful, make-your-own-backstory toys of yesteryear, have a look at Jeff's Flickr pages. 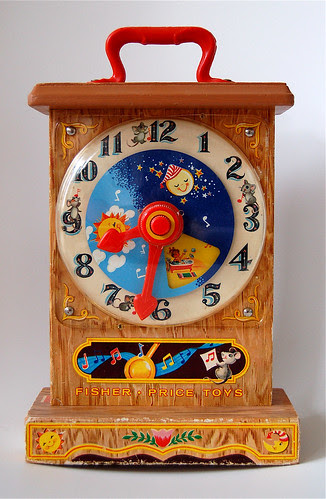 We had this around the house when I was a preschooler; I thought it was the most magical thing in the world. 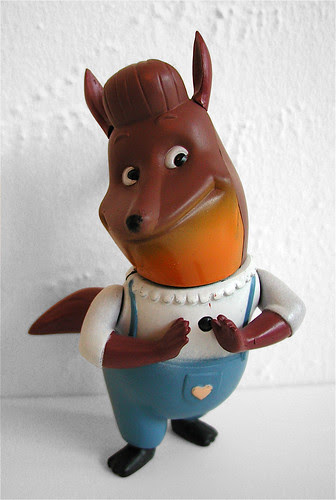 a bootlegged toy knocking off a character from the Disney film "Chicken Little"
all the images are by and appear courtesy of jeffpidgeon.com

Jeff's toy collection is a wonder to behold. And he's one of the single best story men in the business. Nice post, Jenny!

I had that clock too! Remember the tune? Grandfather's Clock goes tick-tock, tick-tock...

Thanks for the memories! I always enjoy your blog Jenny. :)

I'm really impressed with this post - and what great timing with the newspaper article. You've offered readers something to really chew on which I appreciate. As always, thank you for always delighting us.

My buddy Vin Teng did the sculpt on this toy... http://sculpster.com/

I love your post. Too often toys are used in the context of their back story. Two of my favorite Pixar moments are in the beginning of Toy Story and the end of Toy Story 2. In the beginning where Andy is playing with his toys in a way that was probably out of the context a rational thinking adult would imagine for the toys. It's Bazooka Jane and her rocket powered horse! I think that is one reason I loved Legos as a kid, there was no real set story for them at that time. You built things from your own mind and used your own imagination for how you played with them. Heck my first Lego people didn't even have faces, just a yellow round block for a head, no moving arms or legs either. I remember how much fun a simple stick was. Hours of endless play in countless situations. I remember the excitement I had when my parents would buy a new appliance. Not for the new appliance, but for the box. One moment I could be on a flight to mars, the next living out 20,000 leagues under the sea, followed by a trip in a blimp, to who knows what next. OK that is enough blathering for one day.

Not surprising. There are those who just don't get it.

When I worked at Pixar with Jeff, we had a room full of toys. Call it inspiration, or just call it silly, it's what inables us to do our jobs.

Thanks for the write-up, Jenny! I hadn't seen that article, so it was an interesting read.

I have mixed feelings about the high level of licensing in toymaking. As a collector, I love it because I can have toys of my favorite characters! But I do worry sometimes about the effect it may have on kids' imaginations.

I think sound chips in toys are similar - I love that toys can make sound effects, but worry that it'll diminish the poitential for invention and creativity. I made all my own sound effects during playtime!

Anyway, thanks again for the post, and to everyone for all their flattering comments!

Re: sound chips/voice boxes in toys: when I was 6 I got a Sears Disney Winnie the Pooh for Xmas--it had a pullstring and talked--but in a woman's voice, which bugged me no end.

Fortunately later that Christmas day the string broke with a too-vigorous pull from me, and I never had to listen to that weird non-Pooh voice again. I also removed the lame red sweater with "Pooh" embroidered on it and proceeded to drag Winnie all over the backyard...and he finally looked like the Shepard drawings. I was happy at last!

I also love-and loved-licensed toys--gosh, I went through more Disneykins--but often kids just rename or remake the stories about them...anything kids do when playing is right--which makes it so silly when business people seem to really believe that those "backstories" matter. They really don't, if the toy has any worth. Kids will make up their own minds. I can't believe their imaginations can suffer--theirs are much too strong and individualistic. At least, I hope so!

One of THE seminal toys i ever had was a humble vending machine Rat Fink figure; I had zero idea of Big Daddy Roth, I just thought he was fantastic(must have been that expression)...and I thought I was the first to name the guy. I'm sure I thought I invented him, too! I certainly knew I was personally responsible for bringing him to life. ; )

I feel compelled to add my two cents. When I was a little kid, I stumbled upon the Smurf characters at a strange little shop next to the movie theater in my hometown. Instantly, I fell in love. There were so many different outfits and props, whole sagas could be invented. I saved the red, bearded one as Santa Smurf and created a royal kingdom of little blue guys...and then the cartoon premiered. I hated it, hated the song, and hated their version of Smurf society. I felt as though something very precious was stolen from me and I threw away all of my figures. I'm still upset that the toys that were the most cherished at Christmas became embarrassingly inane by the next fall.

This post takes me back to the kidvid deregulation of the 80's. We worked for toy manufacturers on some of the worst TV in history. They were 65-episode syndication packages for shows intended to "add play value" to their products.

My brother had the tick-tock clock. Nothing, nothing had more magic than that toy. My brother and I would sit and watch the time change in the little window, it was the purest magic any kid could ever witness.