Even a Rat Can Dream

On Friday the crew of the film I'm working on went to the movies together. 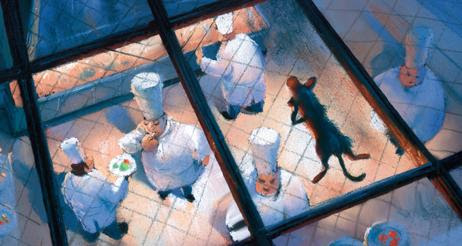 Although this is a fact of life well known within our industry, for the benefit of others I should describe the symbiosis of everyone working on animation--in particular on the grueling, long-form, long gestated projects shown in theatres.

It's hard not to notice that animation fans, critics and writers often assume that the various studios have the mien of warring camps. Certainly they are all in competition in the marketplace. But it would be a mistake to think that there isn't a mutual and healthy atmosphere of respect among the artists and productions. There is. And while film feifdoms must by necessity remain apart and secretive for obvious reasons, the small world of animation is so cross-pollinated that on a personal level virtually all of us are invested in what's going on all over California and really, in the world at large.
So, when a new film comes out of some importance everyone is eager to see it.

"Ratatouille" is an anomaly of sorts for the director and screenwriter. Begun by Oscar winner Jan Pinkava, the story of a french mouse with an exceptionally sophisticated palate just didn't sound like the sort of project that Brad Bird would be drawn to. But this director is also an exceptionally sophisticated screenwriter, and the resulting film is the best recent example of a true modern fairy tale. Light, elegant, sweet, gentle--but with the fillips of danger and the threat of death that all the best fairy tales have. I walked out of the theatre into hard, hot Burbank thinking of the old New Yorker writer E.B. White.

There've been films made of White's children's books, most notably "Stuart Little" and "Charlotte's Web", but none have come close to capturing the style and elegance of White's stories(if you haven't read them for yourself, you should-no matter how old you are.). "Ratatouille" does, and it's because of the writing first. Mind you, as Bird has said and as is obvious, a screenplay isn't just talking, and neither is this story. People and rats talk, but only to their own kind and only when they have something to say, and it's worth noting that Remy, the hero, spends many scenes unable to speak at all--and those are probably his best scenes.

White had a talent for creating "real" animals living in a human world, possessed of nuanced personalities yet not quite human. One of my pet peeves is when animals are used in a supposed naturalistic fashion--that is, in a story where they are perceived as mere beasts by humans, but instead of exploiting the unique and familiar animal characteristics every person recognizes the choice is made to turn them into little people who only look like animals. Sometimes that serves a movie best. More often it doesn't.

Remy uses his hands as rats do--but along with doing so in an anthropomorphic fashion, he also frequently does things as a rat would do them, albeit if he had human intelligence. The scene where he almost escapes the sure-death of the kitchen for the first time but can't resist correcting the soup is a great example of this kind of character animation. The thousands of choices made by director first and all the animators(as well as the story crew)afterwards add up to that E. B. White perfection of fantasy becoming believable and natural. 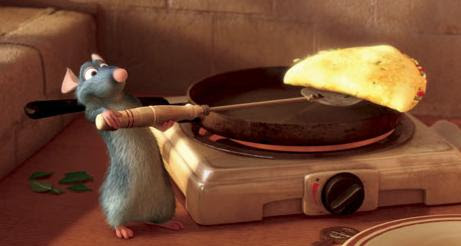 Remy makes breakfast for Linguini; he never gets to nibble his own tiny omelet, though

One thing one knows in a Bird film is that he will never, ever write down to the audience. I don't believe that any screenwriter aims to be patronizing, but Bird goes one further every time out. If every soul in a seat doesn't "get it", well, they can follow along with the mood and it's on to the next scene. The first appearance of the aesthetically severe food critic Ego was one of my favorites; there's no way that a lot of kids in any audience will understand what he's talking about, but they'll know he's dangerous, somehow. The danger he happens to pose is the loss of a Michelin star or two--and what a film, that can make the hoi polloi give a damn about that? But it works.

It's supposedly Remy's story, but it's really about what happens when he's in a certain situation, rather than all about him alone. This is a fireside yarn, an anecdote, a fairy tale about one little rat, a hapless guy and a once-great restaurant in the greatest epicurean city in the world and what happens when they all come together at the same place and time for a couple of weeks.

I haven't mentioned how it looks. It looks like good food smells and tastes. It looks like the best sort of caricatured reality...no, not reality. Well, it looks delicious. I mean delicious animation.
Wonderful vocal performances. Loved the way Lou said "little chef" with real affection. I had no idea that Garofalo was Colette til the end. Great score. Beautiful lighting (which did look like Paris light to me as I remember it; I'll have to take it up with Michael Barrier via email, but I'd swear that some of the light-on-buildings in the film looked a match for the early-morning video I took, posted on my Sketchbook blog).
Fantastic end credits--this last is a particular issue with me; animated films really should exploit their credits, front and back, by making them as visually pleasing and creative as possible. It doesn't happen often enough. This one does.

And it just so happens that the very last line in the film happens to be the one thing I ask of every movie I go to see (and all too often don't get).
To have ended on that phrase, that invitation, that challenge put a silly smile on my face that lasted all the way into the murderously hot afternoon sunshine, to my car, and all the way home.

Addendum: I deliberately avoided all newsy articles, spoilers and film reviews of "Ratatouille" before I saw it, so now I've got a bit of catching up to do.
By all means check out this review by Scott Foundas in the L.A. Weekly. Very well written as well as touching on many things I didn't. Same reaction, though.

And one more thing: not just by the way: congratulations to Jim Capobianco for a wonderful credit on a wonderful film. Way to go, fella.

And lastly, it did make me hungry.

Still a month away from release here. Though about the Paris lighting... the night views I've seen in the screenshots and the 9-minute-clip didn't quite feel like Paris to me either. It all looks so blue, while my recollection of the times I've been there is that it's a lot more ochre/beige (that's at night... in the morning or with cloudy weather, when all lights are off but the sun isn't really there, it did feel blue-ish). But in any case, it did have a very different mood and atmosphere to me. But I guess everyone's experience is different.

It won't bother me though. I'm sure all the choices will be right for the moment, even if it doesn't quite feel like Paris.

That first drawing up there is STRAIGHT out of Citizen Kane!

Well said, Jenny! This is much more thoughtful and elegantly written than the little blurb on my blog. I agree with all your observations whole heartedly.

I'm appending a link to your post on mine. :)

I was also compelled to compliment you on your fluid, elegant writing. Consistent tone throughout too, and having seen the movie the observations were accurate and in-depth while remaining as detached as possible. I'd read reviews if they were as easy on the nerve-mush as yours.

Really well said Jenny, i too think E.B.White would have liked this one. I have to admit i had some skeptic attitudes going in, but was completely won over. This is my favorite kind of movie, a fantasy with a lower case "f". Hard as hell to do too, but RATATOUILLE is whimsical without being one whit "precious"--something that usually wrecks such concepts. Enjoy your iPhone! (Can you blog from it?)

I really enjoy your site -- especially all the great old Disney legends' art you post -- and I've been a regular visitor for months.

I'm glad you found "Ratatouille" so delicious a dish -- I did, too -- although I doubt I have more than a glimpse into how difficult it really is to produce something this wonderful.

It's not my favorite Pixar film -- that's always a fun and lively debate with friends, family and other movie fans -- but I do think it's Brad Bird's best to date.

Anyway, I thought I'd also send you a link to a "Ratatouille" story featuring an interview with Mark Andrews. You and most of your readers probably understand the process, but it might still be worth checking out.

The only thing that could improve this movie was if it was in smell-o-vision.

Great review Jenny. I really enjoyed the movie and will be seeing it again on the big screen, something I rarely do. I loved the end credits as well. Something I hope they keep doing and one upping themselves.