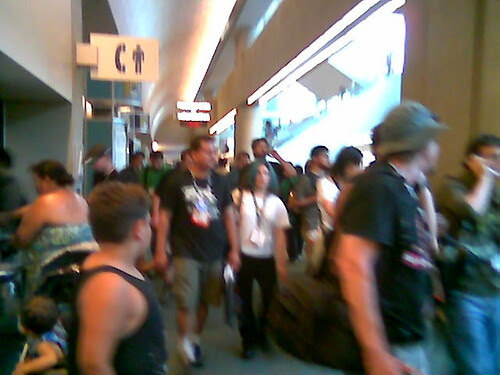 The scene outside the hall at last year's Con
The circus is in town again. Or rather, leaving town for San Diego.

Every year the Comic Con gets bigger, if that's possible, and more and more artists are representing themselves with books and other items of interest.

Last year, many of us were at the Con on the same day, and while I was only able to dash about for a brief two hours of sweating madness
(tips: never leave late, don't drive, and don't go on a Saturday), I had such a great time--my first trip in years--and was so inspired that I determined to do a book...or something. As it happens, so did my friends. Lots of my friends. Eventually six of us story folk decided to do a book project together, and get a booth for the Con this year. We did. But along the way we had a detour from self-publishing; now our compilation book will be released by a real company, one of the best ones. Due to the dealmaking and the publisher's schedule it won't be available until next year's Con. I'll post more about our project later.

In the meantime our booth was ceded to another band of Dreamworks-based bloggers:

All swell guys. Read more about them over at Donnachada's Daly Blog, complete with floor layout and location. This is going to be a great weekend with lots of eyepopping loot to be got.

Wow, a book deal! That sounds exciting Jenny.
Hopefully I'll see you there next year.

I did indeed see the DreamWorks guys at the ComicCon.

Looking forward to the new book next year.

Geez, wish I knew you were there, Jenny, otherwise I'd have said hi! Not like it was easy to find anyone at that thing though...

I saw you, Floyd--but over/between about 50 other people! If I weren't so short I'd probably be able to fight my way to more friends, geez.

Thad! I read your report after the Con and I too wished I could have met you there. Next year? And don't ever take those Hollywood tours--I can give a good one with cartoon highlights.