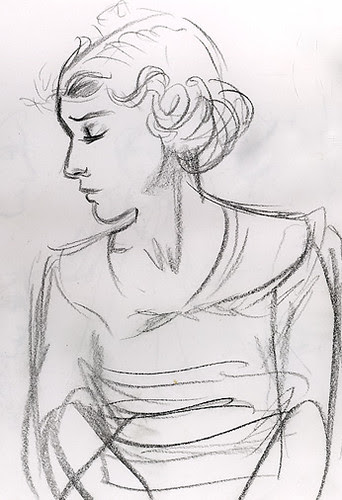 Everybody's got a blog, now. I've been online since the pre-WWW days, the days of mere Usenet message boards.
Which makes me really, really geeky, no question. But when the internet discovered graphics, boy oh boy, was I there. Not so much to post, although I did for some years have a website up devoted to Ernie Kovacs, a particular inspiration of mine(now down, someday to be revived)...no, I like to browse, read and learn--like everyone else. Look at eye candy. Laugh at funny stuff. Engage in debate, or not. See beautiful pictures other people take the trouble to not only make, but post(see my links).

So, in admiring all these sites and lately, blogs, I have felt the increasing itch to do my own. And what the heck--there's few enough of us out here as it is--oh, lots of guys, but fewer girls, who work in animation. I'm often asked why that is, by the by. The answer is--I have no idea.
One thing I do know: the girls I hung out with, none of whom were artists/cartoonists, all loved Bob Clampett just as much as I did(not counting Bob Clampett's own daughters, who went to school with me in the ancient days--that's not fair. Anyway, we weren't good friends, though they were a couple of red-headed and very smart cookies--that's another story), and Bugs Bunny, and screwball comedies, and hard-boiled film noir, and french new wave films...and so on and so forth.

One possible reason, if there is one, that more of my current colleagues aren't female is probably because they had no idea that you could be an animation artist. I didn't think of it myself until one fateful day idly browsing college brochures in the Immaculate Heart high school library. Suddenly, there it was: CalArts. Character Animation program. Eureka! I'd always thought I'd go to art school and be an illustrator, do books...because I'd spent my entire artistic life drawing stories. Not comics, oddly enough, but stories. Pretty much storyboarding.

Since 1992 I've drawn storyboards for a living. Great fun, great people and every day something new. Not bad.

That's terrific Jenny;
I'm glad you're doing well at what you enjoy.

Your Mary Pickford drawing is great!