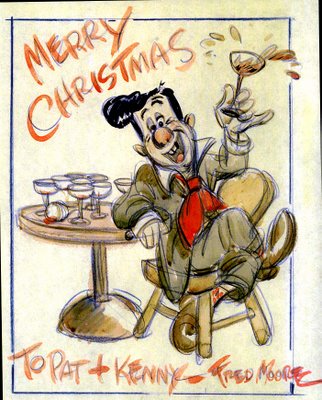 Well, how many ways can you use "Moore"?


Perhaps we'll all find out; I've got enough artwork for several more posts at least, so the Fred Moore extravaganza will continue into next week. In addition, there's more rare material not yet organized from the father of this visual feast, animator and collector James Walker. So when he's ready and we can get together--up it goes. An as-yet unpublished shot of Moore enjoying himself in the usual way, circa 1943. The woman barely seen at left is identified on the reverse of this photograph as "Arline"; if any historians know of an animation professional of that name, let us all know!
Thanks to everyone who's expressed such enthusiasm for this series of posts. I've yet to meet anyone who wasn't delighted by the work of Freddy Moore, whether on the screen or on paper. It touches a chord in people that's pure and perfectly on pitch; that's a rare quality for an artist to produce, and judging from the comments and email I've received, Fred's talents resonate as strongly now as in the so-called "golden age" of animation. Frank Thomas Ollie Johnston--and to a lesser extent Ward Kimball, Milt Kahl and others--have had the latter-day opportunity to provide a face and voice for the work that entertained literally millions of filmgoers, via books, appearances on television and supplements to videos and DVDs. Aside from the nods he's received from those quarters (as well he should, having trained and helped those men), Fred's early death at age 41 robbed him of the chance to enjoy our thanks and appreciation. The next-best thing we can do is share it amongst ourselves, and give him the credit he's owed. He'd no doubt have been a bit embarrassed and demurring about it all--but I'd also bet he'd love it.

In July 1946, there was an Arline Eggleston in 2F-2, sharing this room with Ralph Chadwick. This was next door to Dan MacManus in 2F-1 and Gerry Geronimy in 2F-3...

(There was also an Arlene Fisher in the Personnel Dept. in 1E-1).

Thanks jenny for serving up all these tasty s'Moores. It makes every Moore-ning a pleasure. Don't ever feel that your Moore related posts are geting tiresome; the Moore the merrier!

PS: Contrary to the above message, I'm not a nerd.

Hans--wow! Thanks so much! It must be the first Arline-same spelling(especially if she was in the animation dept.--was she an assistant?).
You know everything! May I ask you a question about the office assignments?
What was Fred's room number in 1941? Was his office shared with Bud Swift and/or Tom Oreb(who I think was Kimball's assistant)? And was Ward's office in the same hallway, next to Fred's? And was their secretary in that hall by any chance named "Mary Jane"--[last name unknown]?

Hi, Jenny! I fear my omniscience is only skin deep. I have NO info on 1941 room assignments...
What I know is from a telephone directory of July 25th, 1946.
And there are many Mary's on that, none in 1D, and no Mary Jane's.
You can see that Ward and Fred were neighbors in 1946, as I wrote all "inhabitants" of 1D on my blog a few days ago. On the same directory, Tom Oreb and Bud Swift share 2D-3 with Dick Kinney.
It certainly could seem Arline was an assistant.

WOW ! What a week of posting. A deep bow and mucho thanks to you and James Walker for sharing all this and broadening our knowledge (the "socialist commune" thing , for example) and appreciation for the artistry of the great Fred Moore.

I try to draw with that elusive Appeal™ that Fred personified , but like Tom Lehrer's line , "It's people like that who make you realize how little you've accomplished ... for example: it is a sobering thought that when Mozart was my age... he'd been dead for two years" I often wonder if I'll ever get anywhere close . ( I turned 43 this year and Fred died when he was 41) . However, the stuff you're posting makes me want to keep trying .