Given the breadth of knowledge and interest of visitors to this blog, I thought I might strike gold if I made a direct appeal for any information about the late, great Don Graham, legendary instructor at Chouinard's and later the in-house life drawing guru of the Walt Disney Studio.

What I'd like is to be able to locate whoever he left behind him who's in charge of his estate. I ask on behalf of a former Chouinard(not Calarts)graduate who was a student of Graham's.

Please contact me via my profile page email if you can help. Thanks!

...and all dynamic composition in a new post from Dave Pimentel.
He was reading through Bill Peet's autobiography again, and worked out a lesson plan for his students at Calarts based on Peet's incomparable design and staging. Mark Kennedy has also used Peet for such examples in his blog--and anyone interested in the art of animation storytelling would be well advised to check out both these veteran's posts on a regular basis.
Dave will be no doubt be putting up more of his ideas and handouts for his students as the semester goes on. A great opportunity to learn from these grads and teachers. 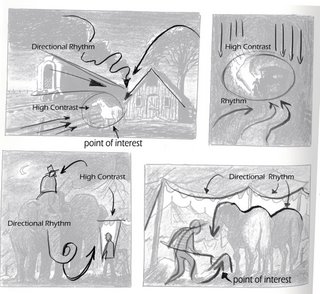 illustration courtesy of the Drawings From A Mexican blog I've recently had reason to spend time at UCLA's vast, impressive medical complex. Although my business wasn't in the department of the renowned Jules Stein Eye Institute, it was close enough, and I remembered that the stolid, sleekly functional medical building contains a lovely little secret tucked away for children and their familes: a mural commissioned and donated by Walt Disney, and designed by Mary Blair.

It's not a huge piece, but it's been done to fit a specific niche: one wall of an,ordinary, smallish rectangular children's waiting room.
Done by Mary at the peak of her "Small World" work, dating(I believe) to 1964, it's reminiscent of her late lamented Tomorrowland tiled mosaic. The ceramic tiles used in this work are large--more than a foot square, with much raised texturing and outlining of the the figures, along with accents for pure fun. The wall is broken up by a bathroom door for the use of both boys and girls(I would have loved being depicted as an an indian myself, rathe than a matching cowgirl-trust Mary to do it): The wall's in pretty good shape--a few tiny areas have small chips, but nothing major--and remember, this is a kids waiting area--it's amazing that it's survived as intact as it has for 40 years.

I wish these images were of better quality, but they're taken from a brief video I shot while there. As this is very much an in-use space and there were a few parents sitting on a couch beneath the wall, I had to be hasty and do my best to avoid inadvertently capturing anyone in the frame. The result is certainly not as definitive as I'd like, but I knew readers here would get a kick out of seeing it.

I certainly hope that you never have recourse to visit the facilities there, but if you do--it is a wonderfully interesting, invigorating place to be. As well as one of the best centers of its kind in the country. And of course, it wouldn't be there at all if not for the gift of the special patron responsible for it: the cross-hatching resulted from the glass door of the room being opened back against the plaques-as with the Mary Blair plaque above
Walt Disney's legacy of giving back to the community continues to this day at UCLA--the names of Geffen, Katzenberg and Peter Morton(founder of the Hard Rock cafes) are visible throughout the hospital. I'm sure there are the names of many, many more prominent entertainment figures that I didn't see.

The gifts of those that are able to contribute have made huge differences in the lives of millions of people who know nothing about the donors. While most monetary help is put to use in practical ways like machinery and operating budgets, this older gift is a small, sweet vision of pure art gracing one room of the Eye Institute. Thank goodness it's survived to this day through hundreds of refabs and redos and razings and spiffier buildings erected. I wonder how many children have stared(or tried to)up at Mary Blair's wall and thought of Disneyland, or just of fantastical adventures featuring the children shown there? 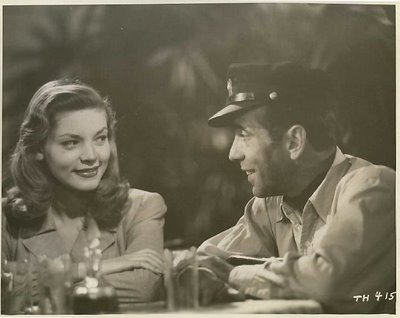 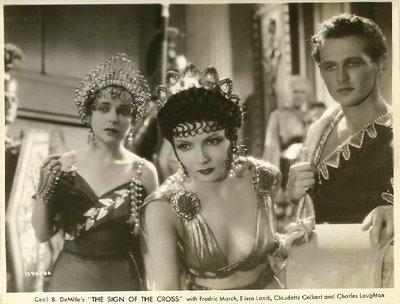 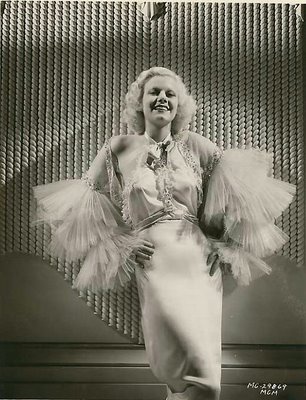 The irrepressible Paul Fisher as drawn by the inimitable Dave Pimentel

The other day's post about my colleague Paul Fisher was based on a single drawing of his that I've had pinned to my wall for the past several months--that one of the Toad closely examining...something or other. Here then are a few final panels--albeit 2nd generation xeroxes scanned on my dubious flatbed--from one of my favorite scenes in "Flushed Away", sequence 1750: the Toad/celphone business. For those who haven't seen the film yet, the Toad is speaking via celphone screen to the heroes; his arms and legs are actually those of another character.

This is a prime example of a story artist doing his thing in sync with the characters in a scene he devised himself. These are mostly in sequence with a couple of my favorite wild card panels tossed in. The entire thing consisted of several hundred story sketches..
And as always, remember: all the images in this post save the caricature are ©2006 Dreamworks Animation. 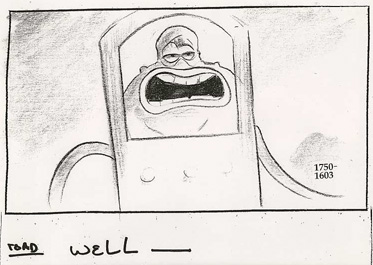 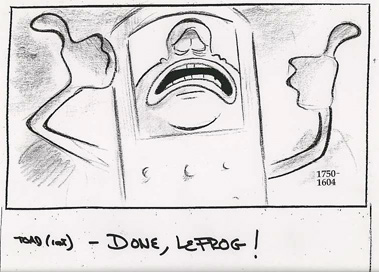 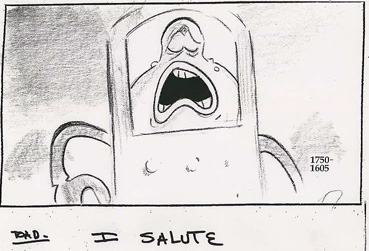 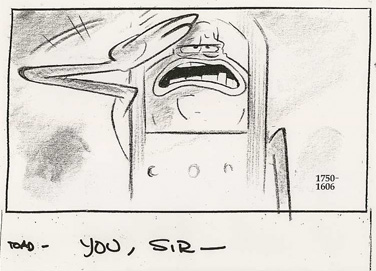 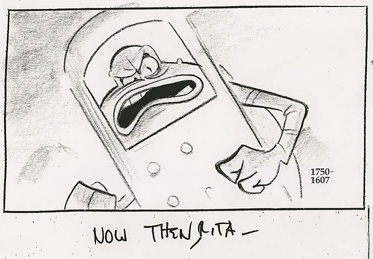 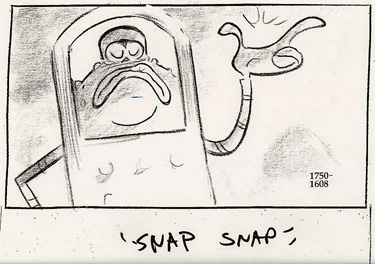 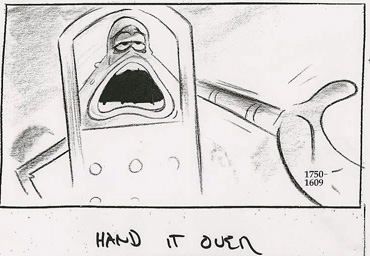 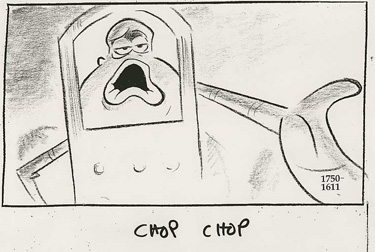 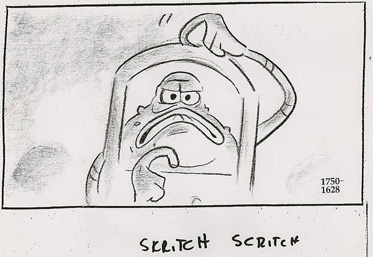 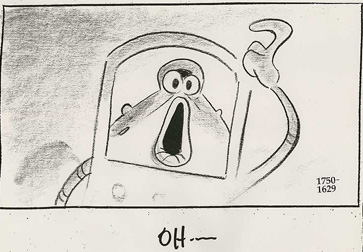 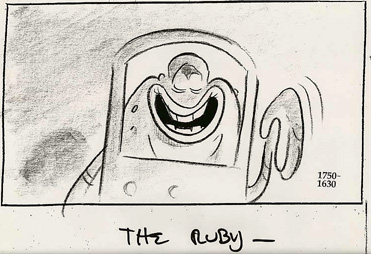 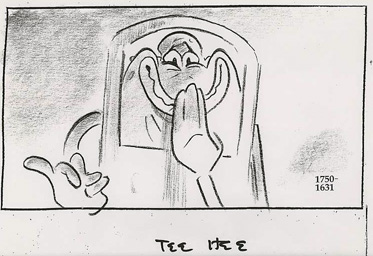 And here's a lovely drawing(one of hundreds) from yet another guy I occasionally catch a glimpse of here at work:

Rodolphe Guenoden
has a way with women. My friend Patrick Mate was on a George Pal binge recently, immersing himself in the great Puppetoons among other things from genius animator Pal. The above is his idea of he and his wife as Pal creations...well, Pal-Mate creations.
He's got that wonderful odd stretching-the-legs-to-meet-the-ground walk of Pal's down here. Really, if you haven't seen the Puppetoon Movie, Netflix it now.

Toad in the hole: Paul Fisher Paul endowed the Toad with a generous helping of himself: a not-so-thwarted thespian-megalomaniac. All images copyright 2006 Dreamworks Animation and Aardman.

I generally make it a point not to mention anything that pertains directly to something I personally have worked on, but I do enjoy pointing a finger at those artists I work with or near that deserve special mention.
Patrick Mate, Devin Crane, Dave Pimentel and Donnachada Daly have all had blurbs from the Blackwing Diaries, and so with today's release of the Aardman/Dreamworks production "Flushed Away" I'd like to direct you to the "heart and highlight"[Paul's words, written for Ian McKellan's Toad] of that production: its prolific and very funny head of story Paul Fisher. left to right: a barely visible Mark Kennedy, Paul Fisher, Jenny Lerew, and Ash Brannon at Calarts--all veterans of the class of '87-90. I believe I'm actually on the phone to Don Knott's agent in this shot. He really should have done Mark's film. another rough board drawing; Le Frog and a compatriot
Paul had a habit on this production of drawing all his boards very, very small, then knocking in the tone and blowing them up on the xerox to pin up on the boards. These measure a little less than the size of a playing card; the size of our actual story pads is much larger, but both keep to the same filmscreen ratio.
So, being relatively tiny these are also fairly rough or loose drawings, but they're just right for the places they fill in the story.

Paul has a particularly keen feeling for nuance in a character's performance--and, better than that an eye for the absurd in every circumstance. Like all good artists, these guys are utterly real to him when he immerses himself in a scene, which in my opinion is why he's able to get real laughs and a genuine sense of life from his cast.

These drawings are basically scraps I culled from his floor over the past several years of "Flushed Away"(well, maybe from a shelf or the seat cushions of his guest chair--this stuff is everywhere; I'm sure all story artists can relate). There are only about 25,000 more where these came from. Put together they make for some great sequences and he isn't a bad boss, either.
Congratulations, Paul--see you on the other side of the weekend. And many thanks to our directors, Sam and David, too.
Cheers!