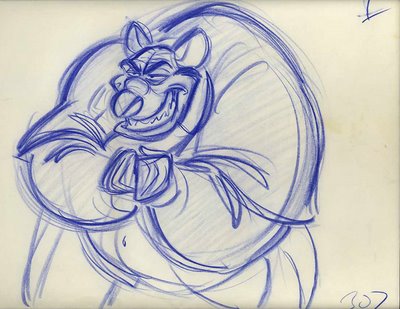 Ratigan, the villain voiced by Vincent Price and animated by Glen Keane, in the originally titled "Basil of Baker Street"

I'm happy to be able to share a few drawings that might offer a glimpse of the unseen work that such artists as Glen Keane did, when animated features were animated on 16 field paper, and characters were drawn with Blaisdell Layout pencils. Be sure and click each image to open a larger size. 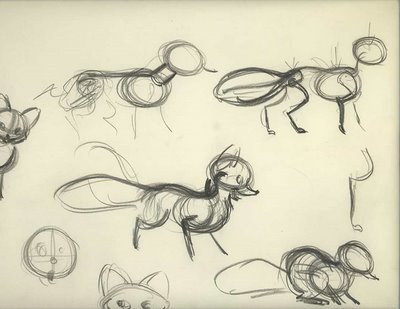 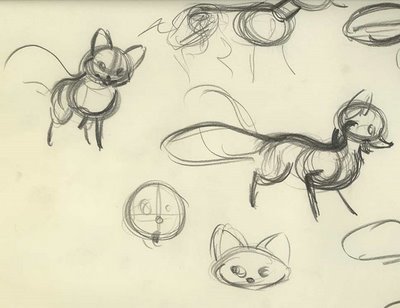 Tod, one of the title characters of "The Fox and the Hound", was animated by Keane; these are a page of studies probably done for another artist's benefit; unfortunately awkwardly split here as the 16 field paper can't fit on the scanner 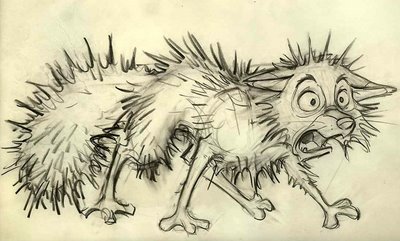 An extreme extreme of the fox, again by Glen Keane.

It's hard to add any accompanying text to a post of drawings by Glen Keane; fortunately, his work doesn't need it. The epitome of an animator's character work is that without sound--in this case even without movement, it speaks for itself. What would I pay to have seen the rough tests done in this period, by this artist and others? Plenty.

Hey, Keane actually constructed pictures with ovals and such. I some some rough sketches he did for Tarzan and they were some crazy scribbles with a grease pen. Maybe he did both in that case.

GREAT post! Once saw FOX & HOUND in linetest- it was incredible- especially the bear fight. Always wondered what Tim Burton's drawings looked like? He says he drew the animals looking like roadkill! The scared fox by Keane gives me some idea how Burton's drawings may have looked?!

These drawings are amazing. If I had them I would frame. They jump off the page at you, talent. Pure and simple talent.

Thanks for sharing these.. they are amazing and inspiring all rolled together.. I have a rough drawing from the bear fight sequence framed in my study.. such power in the bold strokes.. I would have killed to see the line test of that sequence..

Whoa, these are great! Thanks for posting these Jenny!

That is one beautiful Ratigan!

The scared fox drawing feels more like a 'television' quality image. Good but stiff somehow. Don't know if you would agree, however that's my impression of it.

Gorgeous stuff Jenny, can I ask where you got them? I really like the Ratigan one. He was such a fun "broad" charater...literally! These point out how animation truly is art in motion. It's crime how much Disney lost by shutting down 2-D cel animation.

Glen's drawings are so powerful. I just pitty the clean-up artist who has to put the line in the right spot.