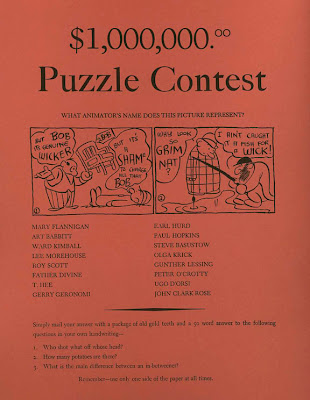 "The Mousetrap" was a oneshot magazine that certain of the Disney artists self published in the late 1930s, before the move to the Burbank studio(I'm not sure of the exact date--anyone?).

It's a compendium of short written pieces a la the good old days of National Lampoon, leavened with caricatures and several pages of girlie drawings by Fred Moore and at least one other artist. Some of the contents have been reproduced elsewhere--most notably in "The Illusion of Life"(Ward Kimball's drawing of George Drake and Don Graham heading east in a jalopy to scout new talent; some T. Hee drawings; Fred's girls). Funnily enough, none of the contributions are signed.

Originally there were but 500 of them made and so they were extremely scarce, but around 1975 or so someone bothered to reprint it in a facsimile edition. I picked one off of a large stack at the old Collector's bookshop on Hollywood Boulevard in the late 1970s. Now both versions are rare.

With that in mind, I thought I'd post all of it here. Some of it is pretty esoteric if you're not hardcore Disney, but that's what this blog is all about, so...

I've got a fair amount of scanning and cropping to do. For a start, here's one of the back pages, with a silly gag thing by--I think--Roy Williams(I could well be wrong, so please, anyone--feel free to correct me). And another of the now-venerable girl compositions, which most of you may have seen already. Enjoy! 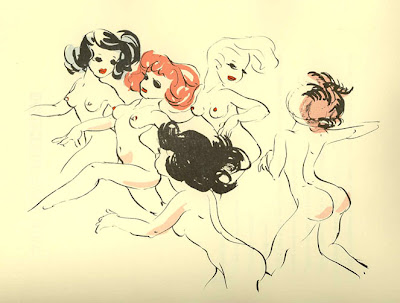 I'm 85% sure this is by Fred Moore--there are definitely Moore girls in the magazine--but I hadn't looked at this for years, and now it's bothering me--it's possible that they're by one of the other artists, as similar as they are to Moore's style. What do you think?

I love stuff like this! The little things (which make up the big picture) that I wouldn't otherwise known about. Many thanks for posting, Jenny -- and happy Easter!

I guess self publishing is nothing new, eh?

I use to read these in the second floor library of the Animation Building at Disney. I was amazed when I found them because no one had ever even mentioned this publication back then.

I have photocopy of this drawing as well. I assume it's Fred Moore. The attitude sure seems like Freddie.

I can't believe you got it in a bookstore...wow, you really do own everything that's ever been published about Disney.

Thanks for sharing these, they are great.

As a side note, and since I have both versions, I'd like to mention that the original and the reprint are at first glance very much alike, except for a notice on the back of the reprint. On closer inspection one finds that the subtler tones of the drawings in the reprint are less visible, the images are a bit more high contrast. Also, the originals were hand tinted, so all the hair colors on the girls are different from copy to copy...