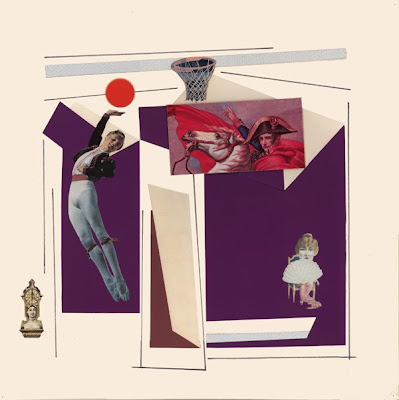 
Tom Pope was a year or two behind my class at Calarts, and it was great to see him at the get together for Bob Winquist in January. He'd brought with him an amazing rarity with a great story attached that he shared with all of us in his remarks to the crowd. I asked him if he'd share the artwork and its backstory here, and he kindly agreed. With the help of fellow classmate Zac Moncrief the very large framed piece was scanned so it could appear here. Tom's story follows below:

"I was fortunate enough to be a design student of Bob Winquist's for two-and-a-half years. So many people have shared so much about the pleasures and recieved wisdom gained from Bob that there is little new which I can offer. That said, Bob did give me something that not all his students can claim.

One day in Bob's class, winter of '90, I was offering my usual sea of valuable insight. At the end of class, Bob asked me if I wanted to teach the next week. I said sure, but... if I gave an assignment, would he do it?

Of course he would. So I thought of something random, as he oftened appeared to do. "A basketball hoop with attitude." I couldn't wait until the next week!
A week later, projects were pinned on the wall of the class room. It being second semester, there were less people in class and less projects since most people were knee-deep in their films by then. But Bob's assignment was right there among the others as promised. It was beautiful, but I hope I talked about someone else's first. I did my best to talk about and critique each assignment constructively and focus on their distinct merits as Bob always, always, always did.

After class, I asked Bob if I could keep his assignment, and he said of course. He signed it "Bob Winquist, 2/27/90" with a flourish on the back. I had it framed, and it has hung on the wall no matter where I've lived ever since. (I also have a handful of the other assignments in my parents' attic in Georgia.)

When I heard that there was going to be a remembrance for Bob I knew that I had to bring the piece. When I heard that we would be allowed to speak, I knew I had to talk about it. The response it got made me realize how lucky I was to possess an example of Bob's generosity in concrete form. The best part of all was the interest that Bob's own family showed in it. If I hadn't been aware of just how special Bob's own handiwork was, I was then.
Jenny has been generous enough to share this forum and to allow me to share this "wonderful", wonderful piece with a wider audience."

My pleasure, Tom. Thank you.

I was there at that class. I remember it well because it was one of the few times I actually 'won' the critique! Most of the time my first year I had not faired so well in Bob's class. But I listened and learned from those who did 'win', like Mike Cachuela and Jamie Caliri. So my second year I was determined to get in the top five if not 'win'. I put the word 'win' in quotes because it wasn't a contest really, just Bob wanted to point out which art assignment fit his rules the best and explain why. But I am competitive. There was a nasty old rusting basketball hoop out side my dorm that seemed sad and lonely and no one used anymore because a newer and better court was built over on the east side. So I sketched it up and went back to my desk and made this dark blue and light blue backboard with color paper, and used a deep crimson color pencil to sketch in the rust. It looked real moody. I liked it. And when I saw Bob's piece my thought was "how does he do that? It looks cool. He cut it all out, had good colors and it looks so clean and professional. Mine sucks!" But I was surprised and shocked to hear Bob say he like mine the best, even more than his own! He said mine had real attitude and emotion and really captured a sincere mood. It was one of the happiest days at Cal Arts. I had finally turned a corner in his eyes and understood good design. he helped me tremendously, and taught me that I could improve as long as I paid attention and struggled to get better. I was telling a friend at work about Bob and this class in particular when I did a Google search for his name and sure enough his piece form that class popped up. I was shocked! I'm glad Tom kept that piece and it was posted on the Internet. Brought back a great memory. Thanks.