In My Beautiful Balloon... 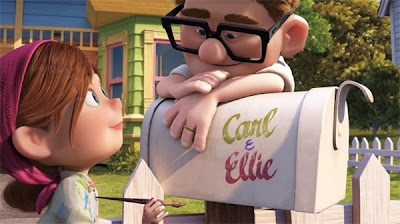 I tend to avoid standard reviewing of contemporary animated films. In the first place there's plenty of that everywhere else. And more importantly I feel close enough to even those films and studios I personally have nothing to do with that I'm sure my reactions are skewed one way or another. There's aren't degrees of separation, plural, in the animation business. We're virtually all connected with every kind of tie and association, sometimes unwittingly. So it can get complicated. In any case I thought I'd post some random thoughts I had while watching "Up" in 3D a week after its opening:

I was struck by how beautiful I found the palette and textures to be. It looked painterly, roughly so in places, as with the side of a palette knife. There was a particularly delicate use of lighting in what seemed a great collaboration of the visdev(AD) and CG departments. It made such an impression on me that I I broke one of my cardinal rules and elbowed the person next to me, forcing him to lean in so I could hiss "I can't believe how great that lighting is!" and "Would you look at that fireplace!" in their ear. What you wish for as a toiler and as an audience member is that the story and visual beauty will both take you out of yourself and put you in that world, and I thought the entire opening succeeded brilliantly with it. I may sound as if I'm contradicting myself there, but it was a beat after being impacted by the beauty of the shot that I woke up to the extraordinary aspect of it. Eating one's cake and seeing it, too. The sets looked to me for all the world like a cozy Viewmaster setting from the early 60s, which I delighted in throughout. I admired (as so many did) the storyboarding, particularly the "growing older together" montage early on. I reckoned it was done by head of story Ronnie del Carmen, and someone told me I was right.
There are a lot of ways to board anything, never one right way (the filmmakers hope it seems the only way), but the way that was done--the transitions, cuts, all the choices--were perfect. I arrived at that verdict because I felt exhilarated watching it. It had to be a tightrope walk to avoid slipping into bathos (some critics felt it did slip, but only a few; to achieve that is a feat with this material).

I felt as touched by the sweet comedy relief of Dug the dog as I did at Carl's running struggle with loss. That might seem a pretty odd thing to say-and I allude here with a virtual smile to my respected friend who may think I've regressed to an eight-year-old's perspective to claim it-but there it is. 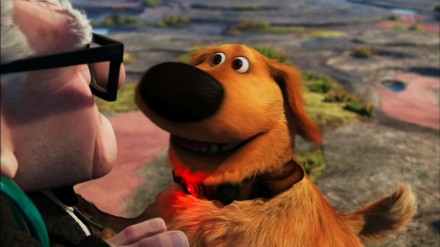 "Dug" was a win for me because of this: one of my pet peeves is the lack of films that make use of plain old reality for comedy, for pathos, for appeal. Dug was in appearance a wildly caricatured canine, but his actions, movement and the clever way his thoughts were translated into dialogue were more real than real for any dog lovers in the audience--and judging from my audience there were a lot of us. The kids squeal and love him because he's friendly-looking, and funny. The adults laugh and respond because they consciously recognize Dogs They Have Known in this unlikely character--and here, by the way, is an illustration of the work methods of the filmmakers I was blogging about in an earlier post. I don't know which of those involved drove the character's handling-director, story people, producers,animators or as is likely a melange of all of them. But those people know dogs, and moreover have loved dogs--a special dog. And have a healthy amount of empathy and imagination and skill enough to make their experience translate to the screen. This is why I enjoyed Dug so much, and not because I'm wallowing in my childhood.

And this gives me an opportunity to say how really fine I thought the character animation was in "Up". I don't know who you are, but I want to find out-all of you: the crews who did Carl (young Carl and Ellie in particular-superb), Dug, Muntz, "Kevin"...all these characters had scenes where the movement and performance blended together in an idiosyncratic and beautiful way. It's a new high point for you guys-as every new film should be, ideally.

There were issues that I found myself thinking about while the film was running, things that I didn't understand, or that I would have done differently. It's a habitual story habit thing--an occupational hazard of the business. I could go into them but I won't, not even obliquely. Not because they're so harsh that I'm afraid to offend but because--on my blog or off--I'm wary of being taken out of context and let's face it, it does happen. It's all too easy to misread a written sentence. It's too black and white, and where some things are concerned my opinions and reactions are more fluid than that. I'm much more comfortable discussing anything I take issue with in person, where a conversation can be had rather than a one-sided speech made. And I'm not a professional critic besides.

An old man in a flying house heading for South America is not your everyday plot. Add a lot of visual beauty and some sincere heart and I want to see it. More than once.

Jenny, your review -- or non review is one of the best I've read.

A thought regarding dogs. In Pixar's early days in Point Richmond, employees were allowed to bring their dogs to work. It was not unusual to see a dog sleeping in someone's office. You can bet this alone gave Pixar its special vibe. I loved working there.

Great review, Jenny! It makes me even more envious that you guys have it and we don't -- not until October! I'm certain Disney/Pixar are performing some kind of test on the British...

Great to read knowledgeable comments by someone who knows the art from the inside.

Someday when it's safe it would be interesting to hear what the issues you hinted at are. I'm sure they're more "what if, instead..." than damning.

The story thing I had trouble with was that for a guy who needed a lift to get up and down the stairs, Carl sure is spry in the last reel. I've since convinced myself that he didn't really NEED it; it was something he installed for Ellie when she was ill.

Brilliant review, and I couldn't agree more. The fantasy of the film was deftly handled, with more than enough of what counts (character, emotion) to keep me grounded. I cared. And the LOOK of the film was stunning as well, thanks to the production designer Ricky Nierva's thoughtful planning (check out the "art of book"). Without being overly-"showy," the art of the film beautifully underlined, commented on, and supported each scene, character and the overarching themes in a way few films (live action or animated) these days do. The character animation is beautifully done, and driven by particular characters with limitations, quirks, and faults that make them more "real" than REAL. Bravo!

But it's the direction of the film that really blew my mind. Pete Docter and Bob Peterson made, in my opinion, all the RIGHT choices for this film. I don't disagree with your comments that others might have made different decisions. But that's all in hindsight, and easier to do. I thought the film was, on the whole, beautifully put together.

Your review makes me want to see it one more time.

great review. i totally agree about the wonderful character animation. did you notice the one bit where young carl is just beautifully captivated by young ellie- she says something, and if you notice, he mouths her words in that very subtle way that we've all done at one time or another when intently observing someone speaking. lovely.

When filmmakers construct a world they build a monument, and the film enthusiasts get to mull over that brick askew in the back left corner.
I rather like your review as it celebrates the world Docter built and doesn't take the jeweler's eyepiece to it. Isn't it beautiful sitting there as it is? I especially connected with the comments concerning Dug. The things Dug says are the same things we say pretending to be our schnauzers, so we giggled and thought, "somebody there loves their dog".