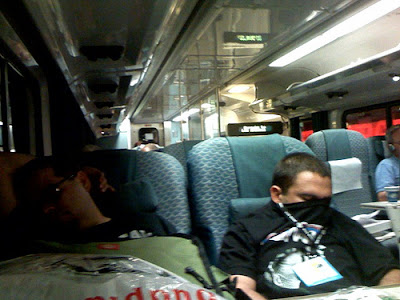 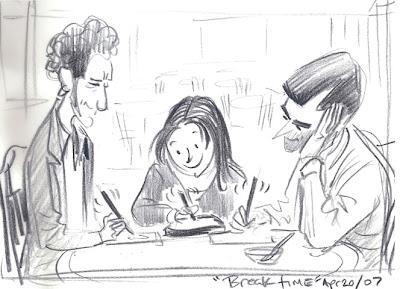 This is a book that I look forward to buying. Congratulations on the deal with Dark Horse.

Please say 'hi' to Ken Morrissey for me. I haven't seen him or his wife Clare in years.

How wonderful! Congratulations to you and your crew, it must very very gratifying! Gallery shows next? ;-) See you at the Comic-Con in Dago, and I hope some autographs come my way for my copy of "Scrambled Ink".
Way to go!

Mark, thanks so much! I certainly will pass along your "his" to the lovely Morrisseys--both of them are tops and I'd wager they haven't changed a bit. : )

vanwall-thanks! I know all our pens will be warmed up & ready for drawing/signing! Gah...it really doesn't seem real. It probably won't even by San Diego. ; )

That's great news, Jenny, hopefully I can get to San Diego this year and get a copy - I can't wait to check it out!

Congratulations on the book and very cute sketch!

Cooooool!
It's going to be an exciting year in books!

Hey, This book sounds really cool, I'm taking animation at Sheridan College (ontario), I really like you blog, the artwork are all favourites of mine. Right now I'm working in a group of 12 to create a short animated film, so this blog is really inspiring. Good luck in the future.

Hi, thanks for your comment! I didn't see it until now.

I just wanted to thank you for spending the time making such a inspirational blog with so many interesting reads. I've been hanging around for some years, so I though it was on time to show my appreciation. More, more ;)

I'm so excited for this, and for you guys to see print like this! It's about time. I love Diana...she's an old friend, and VERY trustworthy. She'll get you through any rough roads without you even knowing you were on one.

Congrats! See you at San Diego, if not before...;)

Hi Jen, was just stopping by as usual then I noticed the link to my blog, thank you so much for that.
Good luck again with the book!
Alessandra

JJ Villard?? I heard that kid drinks blood to full his creative energy!!?? If that's so tell that kid to wake his ass up and do another short.

Hey, Jenny, are you posting anything for Tex Avery's birthday like I just did?

Man, I wish I had known about Tex's birthday. Then I could be cool like Dave. ;P

Jenny, congrats on the deal with Dark Horse. One of my favorite comic companies. Look forward to seeing your stuff on the shelves!