The return of the Carthay Circle 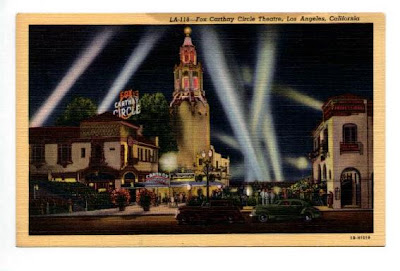 Here's some good news for lovers of animation and film history-and theme parks that could most certainly be a lot better:

Disney's California Adventure will be vastly rehabbed, including a reproduction of the long-demolished Carthay Circle theater.

From the article:
"Favorite California Adventure attractions -- including the Twilight Zone Tower of Terror, one of several added in an effort to address criticism that the park had too few blockbuster rides -- won't be dismantled. A host of new attractions will include several based on Pixar animated films such as "Cars" and "Toy Story."
The entrance plaza will be redesigned and iconic structures reminiscent of old-time Hollywood will be added, including a replica of the Carthay Circle Theatre." 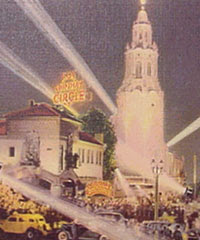 The Carthay was where "Snow White" had its lavish Hollywood premiere; in a generous gesture--considering that A list stars like Marlene Dietrich and Shirley Temple were crowding the theatre for the unveiling of Walt's 'folly'--Disney had arranged for all his key artists to be invited to the black tie occasion.
Years later, several of them recounted what it felt like to be there with the creme de la creme of the movie business going nuts over the film they'd slaved on for the longest couple of years of their lives: incredible.

What a neat idea to do this. I can only imagine who came up with it. Thanks, whoever you are.

Disney-MGM Studios, soon to be Disney's Hollywood Studios, also includes a replica of the Carthay Circle. Alas, it is just an emporium like shop. But it's still neat to have that little tip of the hat to a great moment in Disney Animation History in the park.

Alas, I suspect that the location of the Carthay Circle in Disneyland's 2nd Gate will destine it to become a shop too.

-John
www.thedisneyblog.com
by fans, for fans.

I went to the original Carthay Circle in 1967. where I saw a ghastly wide-screen re-release of "Gone With the Wind," the top and bottom of the technicolor frames lopped off.

GWTW played at the Circle for a year, and then the theater was torn down. I think it was a bank that got put up in its place.

It could be a duplicate of the movie experience ride at Disney/MGM, though hopefully better done.

Actually, my understanding is that the building will be used -- at least in part -- to house an interactive Walt Disney Story exhibit/attraction of some time.

I would have preferred a recreation of the old Disney Studios, complete with the neon Mickey Mouse sign -- but I'm still looking forward to the changes at DCA.

Thankfully I don't think it'll be used as a shop(remember, Disneyland is under new management now).

I too got the impression that both there and elsewhere in the new additions to California Adventure there'd be more historical references to Walt and presumably, film and animation history.

I sure hope so; it's long been a shame that in the virtual birthplace of the motion picture industry as we know it there's never been a substantial museum or decent tribute paid to its importance, really. You can't do too much to include film/Hollywood history anywhere in any venue, in my thinking.

Back in the nineties Disney made a special little movie that I think was for a theme park attraction. In any case, they built a replica of what could have easily been the interior of the old Hyperion studio in Silverlake. As I wandered through the set on stage three, it felt as though I had gone back in time. Suddenly, it was the thirties, and I couldn't help but imagine a very young Walt Disney could come walking down the hallway at any minute.

I saw films at the old Cathay Circle theater when I was a kid. It's nice to know that part of Hollywood history is returning in some small way.

I grew up on the same street as the Carthay Circle. I pray that they'll paint it white, like the original structure was. I'm sooo sick of the "brown/beige-izing" of the world. Here in Los Angeles (and especially at the park) for the last 5 years, there's been a disgusting trend of painting anything with doors and windows a different hue of brown (or "Tuscan" as the sheep call it) with no regard as to what the original architect intended for their building to look like. Wake up folks...White is still alright!
It goes good with Palm Trees!

Talking of architecture in theme park .This week end I met in Brand Park ,doing a oil painting of the Doctor's house,this very very nice retired architect.His name is Andre Vallet a compatriote born in Amiens,who move to the U.S 60 years ago.He worked for the movie studios and work on the construction of Disneyland.I ask him if knew Alice or Marc davis ,and he answer"the man with the big cigar".

Jenny I forgot to mention ,His painting of the Doctor's house was absolutly AMAZING.